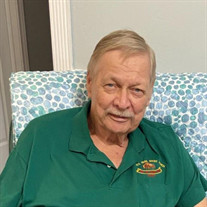 On November 26th, 2021 the world lost a bright light, as William Gearld Rhea Jr., affectionately known as Bill, passed away in Houston, Texas, and went to his heavenly home surrounded by his four beloved children. Bill was born in Dayton, Ohio on August 21, 1938, and lived a life of servitude for 83 years, which was a gift to all those who know and love him. Bill graduated from Fairview High School in 1957 where he met and married Sue Ellen Woodard, with whom he had his four children. Over the years Bill worked for NCR, Dayton Daily News, and Houston Post and Chronicle, and was known for distributing dog biscuits to every house pet and stray along his route. To know Bill was a privilege, and many knew him for his pure heart and genuine kindness. He truly would give it to anyone who needed it. He sheltered and fed anyone in need, took care of any animal he came across and was always on hand to fix family and friends' vehicles. One of his favorite pastimes in his later years was playing on the bunco team, where he kept everyone entertained with his witty and hilarious sense of humor, which was his trademark. As a jack-of-all-trades, he knew a little bit about everything. He loved his family fiercely and as the family Patriarch, he was always on call for directions, advice, and instructions, as you never stop needing your Dad (or "Papaw"). Bill was a son, brother, father, grandpa, great-grandpa, and friend. He is preceded in death by his father, William Gearld Rhea Sr., and his mother Dorothy Mae Rhea, his sisters Margaret "Peg" Hurley (Dail) and Patricia Metzger Rasi (Jim), and best friend Joe "Rocky" Kovacik. He is survived by his sister Geraldine Jamison (William), and brothers Thomas Rhea Sr. (Debbie) and Steven Rhea (Trish); his four children: Deborah Jaeger (Jeff), Cheryl Weisinger, William Rhea III (Cricket), and Jennifer Adrianson (Matt); his seven grandchildren: Justin Jaeger (Christine), Caitlin Weisinger Saraiva (Leo), Sara Weisinger Baker (Anderson), Lauren Crouse (Jeremiah), and Samantha, Jacob, and Payton Adrianson; and his four great-grandchildren: Julian and Finnley Baker, Esther Park, and Charity Crouse. He was a devoted father, grandpa, and great-grandpa, and the strongest person we all knew. Unfortunately, he was taken way too soon and is an irreplaceable part of our family. Heaven shines a little brighter with him there. Thanks to everyone for loving our father over the years. The livestream of the service is available at: https://youtu.be/xyEy0fbxZo4

On November 26th, 2021 the world lost a bright light, as William Gearld Rhea Jr., affectionately known as Bill, passed away in Houston, Texas, and went to his heavenly home surrounded by his four beloved children. Bill was born in Dayton, Ohio... View Obituary & Service Information

The family of William Gearld Rhea Jr. created this Life Tributes page to make it easy to share your memories.

Send flowers to the Rhea family.