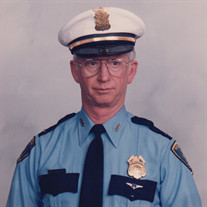 Wilbert Gustav (Ike) Eickenhorst, 79, received his victory with the Lord on August 15, 2014. He was born in Anderson, Texas, on July 29, 1935 to Herbert and Hilda Eickenhorst, baptized on August 18, 1935 at Zion Lutheran Church in Anderson, Texas, and confirmed on May 15, 1949.  Ike was raised in Navasota, Texas, graduating from Navasota High School.   In 1959, Ike joined the Houston Police Department (HPD).  During his career with HPD, Ike worked as a patrolman, detective in the Homicide Division and lieutenant in the Traffic Division.  After 35 years with HPD, Ike retired in 1994 as the Lieutenant leading the motorcycle detail.  Ike was a founding member of the Houston Retired Policemen’s Association and served as the organization’s first president.   On September 15, 1962, Ike married “a girl from Houston" (as reported by the Navasota newspaper), JoAnn Watlington.  Ike and JoAnn were married at Trinity Lutheran Church in downtown Houston by Reverend Donald Black.  For the next 52 years, the couple would build their lives together, travel the world, raise children, and make their home in Houston.  Ike was a faithful member of Trinity Lutheran Church where he served as an elder, founder of the Car Care Ministry, and organizer of the Golf Cart Ministry, among other leadership and contributing positions.   During his career with the Houston Police Department, Ike met and escorted many worldwide dignitaries around Houston.  However, he was never happier or more proud than when he met, escorted or attended events of his grandchildren, Collin, Amie, Ben, Sam and Jack.    Ike is survived by his wife, JoAnn; daughter, Kellie Leitko and husband Scott and children Collin and Amie; son, Randy Eickenhorst and wife Sarah and children, Ben, Sam, and Jack; sister, Wilma Robnett and children Sandy and Sheri; sister-in-law, Linda Eickenhorst and children Willie and Jake; brother-in-law, Clinton Watlington and wife DyAnne and children Celeste and Rickey; and numerous great-nephews and great-nieces, relatives and friends.  His parents, Herbert and Hilda Eickenhorst, and his brother, Morris Eickenhorst, precede him in death.  Serving as pallbearers will be Brad Eickenhorst, James Leitner, Rickey Watlington, Ricky Johnson, Cliff Simmons, and Aaron Fritsche. Serving as honorary pallbearers will be Willie and Jake Eickenhorst. Crucifer will be Blake Fritsche and acolyte will be Kailey Stoerkel.   In lieu of flowers, contributions may be made in Ike’s name to the Alzheimer's Association, http://www.alz.org or Trinity Lutheran Church, http://www.trinitydt.org.

Wilbert Gustav (Ike) Eickenhorst, 79, received his victory with the Lord on August 15, 2014. He was born in Anderson, Texas, on July 29, 1935 to Herbert and Hilda Eickenhorst, baptized on August 18, 1935 at Zion Lutheran Church in Anderson,... View Obituary & Service Information

The family of Wilbert G. (Ike) Eickenhorst created this Life Tributes page to make it easy to share your memories.

Send flowers to the Eickenhorst family.