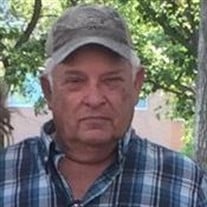 Walter Seidel, age 68, passed away on April 12, 2018 in Bastrop, Texas. He was born on August 4, 1949 in Houston, Texas. As a child, he went to school in Aldine and eventually met the love of his life, Patricia Rogerson, and on April 4, 1966 they began their lives together as husband and wife. They were then blessed with four children, many grandchildren, and even great-grandchildren. Walter spent his professional career at Jarvis International and retired in 2010. As an avid hunter, the outdoors was truly one of Walter’s favorite places to be. As far as from Centerville to Bastrop, he loved to embrace the Texas lands and his family enjoyed it as well. Walter is preceded in death by his parents Ervin and Robertha Seidel. He is survived by his wife of 52 years, Patricia Seidel; children Sheila Ellis, Richard Seidel and wife Tanya, Juanita Seidel and husband Jimmy, Walter Seidel and wife Dana; grandchildren Kim, Mason, Cody, Richard Jr, Kayla, Kelsi, Kristin, James, Stetson, Savannah, Hunter Seidel; great-grandchildren Issac and Destiny Seidel; siblings Barney, Vilina, Neva, Roger, James, Billie, Margie, Deborah, and Linda.

The family of Walter Lee Seidel created this Life Tributes page to make it easy to share your memories.

Send flowers to the Seidel family.