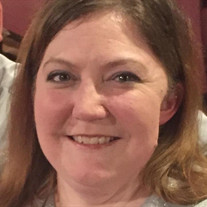 Tanya Suzanne Frank, age 45, passed away unexpectedly on September 27, 2019. She was born on January 2, 1974 in Dayton, Ohio and graduated from Cincinnati’s Finneytown High School in 1992. She received her Bachelor of Science in Elementary Education from Butler University in Indianapolis 1997. From a young age, Tanya loved playing with the sunshine on the floor in her room and playing in the rain. She was a teacher to her dolls, then her siblings and anyone else she could capture. From Junior High through adulthood, she enjoyed singing in and directing choirs, playing in and directing bell choirs, playing and teaching piano as well as accompanying choirs. She loved music of all kinds and dancing, particularly ballet. She was in and directed several musicals. She also loved flag corps. A lifelong person of faith, she taught Sunday School during High School and attended many churches in Ohio, Indiana, Tennessee and Texas. She and her husband, Steven, met at Eagle Church in Indianapolis in 1998 and were married a year and a half later. In 2001, they were gifted with their first child, Alexa, and Christopher in 2003. During this time, Tanya taught at Speedway Schools and Fall Creek Valley Middle School. The family also lived in Collierville, Tennessee before moving to Conroe, Texas. In her adulthood, Tanya invested herself in her husband and children. Her love extended to her parents, her sister, her brother and her entire family. She will be remembered as being a devout Christian, funny, loving, brave, charismatic, selfless, and compassionate. She was preceded in death by her grandparents: Edward and Marietta (Jenkins) Winemiller, Henry and Esther (Rothhaas) Caldwell, Ruth Winemiller, Robert and Wannetta Hilbert, and Edward and Marie Frank; aunts: Vicki (Moreland) Caldwell and Mary (Flaugher) Winemiller; uncle: Terry Winemiller; and cousins: Heather and Gene Winemiller. She is survived by her husband, Steven Frank; children, Alexa and Christopher; parents, Jim and Karen (Winemiller) Caldwell and Andrew and Darlene (Hilbert) Frank; grandmother, Nita Chuvalas; siblings, Tracey (Stavros) Lazos and Chris (Melanie) Caldwell; sister-in-law, Deborah Napier; aunts and uncles, Cheryl and Dave Jones, Joanne Prinz, Roger Winemiller and Steve Caldwell; nieces and nephews, Katerina (Goddaughter), Cassandra and Spiros Lazos, Miles, Jackson (Godson), Connor and Sydney Caldwell and Maxwell Napier; and many cousins, family members and friends. For those desiring, contributions may be made to the following: http://give.cincinnatichildrens.org/goto/tanya-frank .

Tanya Suzanne Frank, age 45, passed away unexpectedly on September 27, 2019. She was born on January 2, 1974 in Dayton, Ohio and graduated from Cincinnati&#8217;s Finneytown High School in 1992. She received her Bachelor of Science in Elementary... View Obituary & Service Information

The family of Tanya Suzanne Caldwell Frank created this Life Tributes page to make it easy to share your memories.

Send flowers to the Frank family.