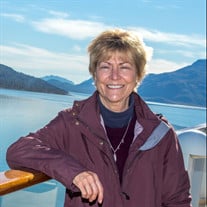 Susan “Sue” Karla Babb, age 60, died at her residence in Montgomery, Texas, Wednesday, November 13, 2019. At her request, no services will be scheduled. She was preceded in death by her parents, Dr. John Little and Laurel (Drache) Babb. Born on September 2, 1959, in Rockford, Illinois, and raised in Beloit, Wisconsin, Sue relocated to Texas in 1979 to attend Texas A & M University in College Station, Texas, where she received a Bachelor of Science degree with double majors in Biology and Wildlife Science. She also received a Master of Agriculture from the same institution in 1984. In 1991, she received her Doctor of Medicine degree from the University of Texas Medical Branch in Galveston, Texas. After a residency in internal medicine at Scott and White Memorial Hospital in Temple, Texas, she joined a group practice with the Sadler Clinic in Conroe, Texas where she practiced from 1994-2008. During this time, Sue also served as Medical Director for Odyssey Healthcare Hospice, Lighthouse Hospice, and Hospice Care of the Southwest. In 2008 until present, she was a Hospitalist with the Hospital Docs practice, primarily working in Huntsville, Texas. Her life was enriched by her passion for animals and the outdoors. She especially enjoyed the time spent studying Bobwhite quail during her time on the King Ranch as part of her graduate research. Much of her time and resources were spent in providing care for animals who were abused and abandoned, particularly dogs. She was an accomplished horsewoman with a love of the Paso Fino breed. She loved trail rides with her “horse friends” at her favorite places in and around Montgomery County. Sue pushed herself to excel in many areas: water-skiing, snowmobiling, zip-lining, and roller coasters were the highlights of her many travels. She had no fear of height nor speed. Her constant energy was amazing and often exhausted others, but she also loved a soak in her pool with a good book. In the late 1990's, she met Gary Eisner, her best friend, partner, and husband of 21 years. Together they rescued over 150 beagles throughout the years, finding forever homes for many, and adopting the rest. Sue is also survived by a brother, John Little Babb, Jr. of Detroit Lakes, Minnesota. In addition, she leaves many loving friends, former patients, and neighbors who will miss her dearly. Her wink, her sarcasm, her child-like excitement, and her stubbornness will never be forgotten. Sue never gave up on anything she tried, and she fought bravely until the end. Rest well. Memorial donations may be made to: Best Friends Animal Sanctuary, 5001 Angel Canyon Road, Kanab, Utah, 84741-5000 or via their website at www.bestfriends.org.

Susan &#8220;Sue&#8221; Karla Babb, age 60, died at her residence in Montgomery, Texas, Wednesday, November 13, 2019. At her request, no services will be scheduled. She was preceded in death by her parents, Dr. John Little and Laurel (Drache)... View Obituary & Service Information

The family of Susan Karla Babb created this Life Tributes page to make it easy to share your memories.

Send flowers to the Babb family.