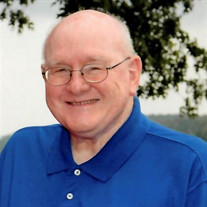 Melvin Spencer Hamilton, Jr. was born on June 1, 1934, in Salt Lake City, Utah. He passed away at home in Spring, Texas, on January 20, 2022, at the age of 87. He was the first of seven children born to Melvin and Alice Hamilton. He was quiet, but quite a tease to his siblings. He was bright and inquisitive, showing interest in many different things. In high school he was on the football team and played the violin for many years. He taught physics at Ricks College before receiving a degree. He went to Utah State University receiving a Bachelors and a Master’s degree. Next, he moved to Minneapolis to attend the University of Minnesota pursuing a PHD in mathematics writing a dissertation titled “Partial Differential Equations of Parabolic Type”. It was during this time that he met Gerry Mandy after she joined the Church of Jesus Christ of Latter-Day Saints. He proposed to his sweetheart on New Year’s Eve in 1965, and they married in the Salt Lake Temple on August 12, 1966. They lived in Minnesota, Utah, and Connecticut while raising their children, three daughters and six sons. Traveling was great fun for him taking the family to many Church History sites and to all the US states except for Alaska. He was mild and a sweet, gentle man. As an Eagle Scout, he mentored all six of his sons to become Eagle Scouts. He was an avid fisherman and would go on weekend trips to Idaho and Utah to fish with his brothers and children. Camping was always a great adventure for them. He was a big fan of BYU and watched their football games and Devotionals. He enjoyed reading, solving sudoku puzzles, and listening to classical music. He loved spending time with family, eating good food, and playing board games. He was an excellent teacher in mathematics at Brigham Young University and received gifts and brownies from students that said he was the first teacher that helped them understand math. He changed careers to become an actuary for Beneficial Life and then for Phoenix Mutual Life in Hartford after becoming a Fellow in the Society of Actuaries in 1982. After retiring, they moved to Texas in 2002. He was an active member of the Church of Jesus Christ of Latter-Day Saints. He served a full-time mission in the West Central States Mission (Montana and North Dakota). He served in bishoprics, scouts, as a temple worker and assistant Recorder, and in many other church callings faithfully. He also served two proselyting missions with his wife Gerry in California and Minnesota as well as two service missions. He was as a “rock” in the Gospel of Jesus Christ. He is survived by his loving wife Gerry and nine children: Michael (Cheryl), Daniel (Heather), David (Holly), Mary, Alyson, John (Holly), Julie Galloway (Matthew), Andrew (Andrea), and Mark (Nicolette). He is also survived by his 33 grandchildren and 4 great-grandchildren. Also surviving are five siblings: Marilyn Nielsen (Elwin), James (Aundrea), David (Caroline), Janet Flake (Garry), and Glade (Bonnie). He was preceded in death by his parents, brother Brent, sister-in-law Vicki, granddaughter Madelynn, and great-grandson Liam. Those wishing to view the service by Zoom may do so at: https://zoom.us/j/96323206112?pwd=RG5uTVlORWhBcEZ3dG5mQko2M0luUT09 Meeting ID: 963 2320 6112 Passcode: 200316 In lieu of flowers, please make contributions to: https://philanthropies.churchofjesuschrist.org/humanitarian-services

Melvin Spencer Hamilton, Jr. was born on June 1, 1934, in Salt Lake City, Utah. He passed away at home in Spring, Texas, on January 20, 2022, at the age of 87. He was the first of seven children born to Melvin and Alice Hamilton. He was... View Obituary & Service Information

The family of Spencer Hamilton created this Life Tributes page to make it easy to share your memories.

Send flowers to the Hamilton family.