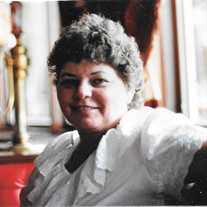 Shirley Mae D’Antoni Steele, 83, passed into the arms of Our Lord Jesus Christ peacefully on May 10th, 2015 with her daughter Shirley Steele White and granddaughter Tina Maria Crim by her bed side. After putting up a good fight for 31 days in the hospital with Tina rarely leaving her side the whole time as Tina was more than just a granddaughter she was the person Shirley wanted by her side whenever she was ill she became the full time extra nurse around the clock sleeping with her every night. Tina was devoted to her mawmaw as her mawmaw was devoted to her since birth as a second mother to her. Shirley was born as the fourth of seven children on September 11th, 1931 to Lillian Bettencourt and Vincent D'Antoni Sr. in New Orleans, La. Shirley suffered all her life with asthma and then she got COPD in her 50’s and had never smoked a day in her life. She was hit by a car at the young age of 12 years old and she suffered from pain from that hit and run accident the rest of her life but you would never hear her complain. She meet the only man she was ever with in her life her husband Ben Mathis Steele in New Orleans through her family trucking company and married 3 months later on April 14th, 1951 and was by his side till his death on September 8th, 1984. They had five daughters. She resided in New Orleans until the wrath of Hurricane Katrina brought her, her daughter Joann and her children Angelo and Francesca LaMartina to Montgomery, Texas where she was able to live by her granddaughter Tina again her husband David and their children Devin and Kyleigh Crim. Her devotion to her loving family and her firm belief in The Lord supported her in her health struggles and ultimately gave her peace. She was not one to complain of her health problems and lived to take care of not only her children but her grandchild and great grandchildren she would say that was her purpose in her life. She loved her city and was one of the first woman to work in the traffic department of the New Orleans Police Department in the early 1950's. She would enjoy going to the casinos to play slot machines and loved to play bingo. She'd often talk about her early childhood days of taking care of her younger brother Joseph D’Antoni while her mother worked. They would share every birthday together. She was a loving, nurturing, caring and devoted woman who sacrificed so much for her family. She was accepting to anyone and handled her many trials and tribulations with grace and dignity. Her love was a source of nurturing and strength for her entire family she was the glue that kept her family together and her love will remain forever in the hearts of her surviving loved ones. She not only raised her five daughters but she raised every generation after them which included her granddaughters Tina, Angie and Francesca and grandson Angelo and her great grandchildren Jake Hotard and was still raising Mariah Walter up to the time of her death. Shirley is survived by her daughters: Shirley Steele White, Yvonne Steele Lee, Brenda Steele Hotard, and Shelly Steele Ward. Her grandchildren: Tina Maria Crim, Nathaniel Steele-White, Brianna White Kuiper, Antoinette Madsen, Danielle Hotard, Angelo LaMartina Jr., Francesca LaMartina, James Ward IV, and Staci Ward Bonura. Her great grandchildren: Kyleigh Mae Crim, Devin Mathis Crim, Riley Kuiper, Mason Kuiper, Joseph Madsen, Anthony Madsen, Robyn Madsen, Stephen Serpas, Shelby Serpas, Mariah Mae Walter, Billy Jake Hotard, Moses Kidder, Midan Kidder, Vincent Hotard, James Ward V, Nicolas Bonura, and Taylor Bonura. As well as aunts, uncles, nieces, nephews, and cousins. She is proceded in death by her husband Ben Steele, parents Lillian Bettencourt and Vincent D'Antoni Sr., her daughter Joann LaMartina, granddaughters Angela Hotard, Ingra Serpas, Grandson Stephen Hotard and all her sibling: Lillian Joffary, Vincent D’Antoni, Joseph D’Antoni, Albert D’Antoni, twins Peter and Paul D’Antoni (died after birth), sister in law Mary D'Antoni, niece Dawn D'Antoni, nephew George Joffary and great nephew Sonny Adams. And in addition cousins, nieces, and nephews, aunts and uncles. Shirley’s services will be held at 11:00 am on Monday May 18, 2015 at Lone Star Cowboy Church in Montgomery. There will be no cemetery services to follow as she will be returned to New Orleans to be reunited with her husband Ben Steele.

Shirley Mae D&#8217;Antoni Steele, 83, passed into the arms of Our Lord Jesus Christ peacefully on May 10th, 2015 with her daughter Shirley Steele White and granddaughter Tina Maria Crim by her bed side. After putting up a good fight for 31... View Obituary & Service Information

The family of Shirley Mae Steele created this Life Tributes page to make it easy to share your memories.

Shirley Mae D’Antoni Steele, 83, passed into the arms of Our...

Send flowers to the Steele family.