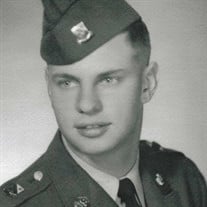 Sanford (Sandy) Cleveland Paterson was born in Elizabeth, New Jersey on March 22, 1938. He was 30,431 days old. As a child he loved to spend his time at Manasquan Beach as well as Point Pleasant, New Jersey. He was known for his wonderful sense of humor as well as his story telling. He graduated from Manasquan High School 1956 and later received a Masters of Business Administration from Pepperdine University, The George L. Graziano School of Business and Management. He served in the United States Army as a Private 1st Class E3 as an interpreter overseas. While serving he received a Good Conduct Medal. His passion for industrial application of titanium started in the 1960’s when he developed anode basket to the electro-form nickel heat shields for the early space capsules. He further extended that experience to De Nora chlorine cells, Hooker Chemical chlorine dioxide generators, heat exchanger for off-shore oil platforms, TPA plants and water desalinization. In the mid-1970’s while the use of titanium metal was still being explored, pipe suppliers rarely carried pipe bigger than 4″ diameter. So Sandy developed a proprietary line of welded titanium pipe called Ti-Code pipes to give the chemical processing industry new reliable alternatives. Till this day, Sandy continues to supply major fabricated titanium pipe projects to the off-shore oil & gas industry, pulp & paper mills, desalination plants and major chemical processing industry customers. He was a founding member of the Titanium Development Association, now International Titanium Association (ITA). He is currently a member of the ASTM B10 Committee on Reactive and Refractory Metals and Alloys, and has held memberships in National Association of Corrosion Engineers (NACE International), Technical Association of the Pulp and Paper Industry (TAPPI) and the Chlorine Institute. Sandford was preceded in death by his parents, Robert and Doris Paterson; brothers, Bobby, Gary, and Jon Paterson; and daughter, Sabrina King. He is survived by his daughter, Andrea Yee; grandchildren, Brittany King and wife Hailey, Shelby Yee and Joanna, Sam Yee, Brandon King; loving friend, Joan Jeffrey and family; as well as many friends that were grateful to know him. The graveside service will be at 1:45 PM on Monday, September 27, 2021 in Houston National Cemetery, 10410 Veterans Memorial Dr, Houston, TX 77038. (We will line up in Lane 2 15 minutes prior.) In lieu of flowers the family asks that donations and contributions be made to the American Heart Association.

Sanford (Sandy) Cleveland Paterson was born in Elizabeth, New Jersey on March 22, 1938. He was 30,431 days old. As a child he loved to spend his time at Manasquan Beach as well as Point Pleasant, New Jersey. He was known for his wonderful sense... View Obituary & Service Information

The family of Sanford (Sandy) Cleveland Paterson created this Life Tributes page to make it easy to share your memories.

Send flowers to the Paterson family.