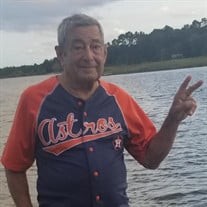 Samuel Serrano-Rivera, age 81, passed away on March 23, 2020 in Porter, Texas. He was born on March 30, 1938 in Camuy, Puerto Rico to Ramon Serrano and Carmen Rivera. He was the oldest of 12 brothers and grew up in Camuy. He left school early... View Obituary & Service Information

The family of Samuel Serrano-Rivera created this Life Tributes page to make it easy to share your memories.

Send flowers to the Serrano-Rivera family.