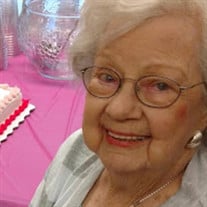 age 95 ½, of The Woodlands, Texas departed her earthly life on Thursday February 15, 2018 to join her Heavenly Father, Lord and Savior. Born July 23, 1922 in Center, Texas, Ruby was the youngest child of Ples Eugene and Effie Annie McWhorter and spent her early years in various parts of East Texas, earning a high school degree at Henderson High School during a time that many women were not formally educated. Thereafter she settled with her husband Upton Sinclair Campbell in Houston where she became a Children’s Shoe Specialist. Upon Upton’s retirement from Maxwell House, they relocated to Lake Livingston where Ruby perfected her love of fishing and eventually returned to Pittsburg, Texas where much of the family had settled. Ruby loved to dance and to play the slot machines. She was an accomplished bowler, who competed in numerous tournaments; ultimately being a member of the Women’s Championship Team from Texas, where she and her teammates competed at the Women’s Bowling Congress World Finals in Las Vegas during the 1960’s. She will be fondly remembered for her independence, her sense of style, her positive and kind spirit, her laugh, her coconut and chocolate meringue pies, her cornbread and her ability to devour any type of chocolate candy (especially Millionaires) without gaining a pound. Ruby is survived by son Larry D. Campbell and daughter-in-law Debbie Buckalew Campbell of The Woodlands, sister Ruth Weaver of Granbury, grandchildren Rhonda Kae Burns, Amanda Lee Frankum, Lindsey Ann Shimek, and Kristen Kay Nichols, and a host of great grandchildren, nieces, nephews, and extended family. She was preceded in death by husband Upton, parents Ples and Effie, infant brother Ollie McWhorter, brothers and sisters-in-law Harmon and Elise McWhorter, Roy and Mae McWhorter, Percy and Hazel McWhorter, and brother-in-law Mickey Weaver. Graveside services will be held at NOON on Thursday February 22, 2018 at Ebenezer Cemetery adjacent to Ebenezer Friendship Baptist Church, Pittsburg, Texas. In lieu of flowers, and if you choose, the family requests memorial contributions in Ruby Campbell’s name be made to Ebenezer Cemetery Association, c\o Erman-Smith Funeral Home, 315 Rusk St., Pittsburg, Texas 75686. Arrangements are entrusted to Eickenhorst Funeral Services in Conroe. The family wishes to thank staff of The Forum at The Woodlands, Grace Residential Care Home of The Woodlands, and A*Med Community Hospice for providing excellent care of Ruby during her final year on earth.

The family of Ruby Ledrell Campbell created this Life Tributes page to make it easy to share your memories.

Send flowers to the Campbell family.