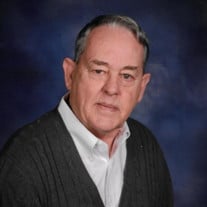 Surrounded by his loved ones, Roy Eugene Simpson, age 76, passed away peacefully at his home in Conroe, TX, on Saturday, November 23, 2019. Roy was preceded in death by his parents, Theodore R. Simpson, Sr. and Madeline C. (McIntosh) Simpson; and his siblings, Edward P. Simpson, Theodore R. Simpson, Jr., and Georgia M. (Simpson) Hammel. He is survived by his wife of 57 years, Doris J. Simpson; son and daughter-in-law, David and Terri Simpson; grandchildren, Kristen Linn, and Cailyn Simpson, and Ian Simpson; great-grandchildren, Aedan and Genevieve; sister, Doris F. (Simpson) Benton, brother, Richard P. Simpson; and numerous other relatives. Roy was born on August 10, 1943, in Juniata, PA, one of 6 brothers and sisters. He attended Martinsburg (now Central) High School in Martinsburg, PA, and went on to have a lengthy career at Penelec in Williamsburg and Connemaugh. Roy also served his country in the United States Air Force from 1962 to 1966. In his spare time, his industrious nature led him to become a self-taught electrician, woodworker, and small engine repairman, among other trades. When it came to relaxing, fishing was second-nature to him; after moving to Texas in 2005, trips to Lake Conroe with his son, David, happened as often as possible. Upon his formal retirement, Roy became an employee of the Conroe Independent School District, where he quickly rose in the ranks of its Maintenance Department. His last role after leaving the workforce was as a volunteer crossing guard at Sally K. Ride Elementary, and it brought him great satisfaction and joy. Roy was an active member of Trinity Episcopal Church of The Woodlands, TX, since 2005, volunteering for several years in the St. Joseph’s (carpentry) Guild. In recent years, Roy met the challenges of his Alzheimer’s, Parkinson’s, and cancer diagnoses with calm reserve, and he persevered through them admirably. He will be laid to rest on Saturday, December 7, 2019, with viewing/visitation at 10:00am and service at 11:00am at Alto Reste Park in Altoona, PA. A reception following the service will be held at 12:30pm at the Fairfield Inn and Suites, 2915 Pleasant Valley Blvd. A memorial service will be held on Saturday, December 14, 2019, at 10:00am at Trinity Episcopal Church, 3901 S. Panther Creek Drive, The Woodlands, TX. In lieu of flowers, the family requests that donations be made in Roy’s name to the American Cancer Society.

Surrounded by his loved ones, Roy Eugene Simpson, age 76, passed away peacefully at his home in Conroe, TX, on Saturday, November 23, 2019. Roy was preceded in death by his parents, Theodore R. Simpson, Sr. and Madeline C. (McIntosh) Simpson;... View Obituary & Service Information

The family of Roy E. Simpson created this Life Tributes page to make it easy to share your memories.

Surrounded by his loved ones, Roy Eugene Simpson, age 76, passed...

Send flowers to the Simpson family.