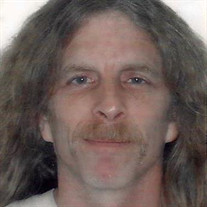 Robert (Rob) Brian Smith, age 61, passed away early in the morning of Thursday, September 21, 2017 after a long battle with Multiple Sclerosis. He was born on April 30, 1956 in Charleston, South Carolina. Rob grew up in the Walled Lake area of Michigan and lived most of his life in Waterford, Michigan near his parents and siblings. He later moved to Texas to be closer to his daughters and his grandchildren. Rob worked as a machinist for automotive suppliers. He was an intelligent man who was always ready with a quick wit and accompanying smirk, encouraging debate on any and every topic of discussion. Rob had many hobbies including reading, fishing, camping, and gardening. He enjoyed practicing target shooting at the gun range. He loved billiards and was an accomplished pool player having played in several tournaments throughout his life. Rob knew how to enjoy life and stop to smell the roses. He was never in a hurry and was rarely visibly stressed because he chose to take life as it came and go with the flow. You could usually find him sipping coffee, smoking a cigarette and blasting the Beatles or the Stones. He had an extensive record collection full of the greatest classic rock artists. Rob had an infectious smile and a caring heart. He especially loved his daughters and grandchildren and always made an effort to spend time with them despite the long distance. He was loved and will be missed dearly by all who knew him. Rob was preceded in death by his father, Claude Smith and step-father, Gordon Rintoul. He is survived by his mother, Naomi Rintoul; daughter, Melissa Eickenhorst and husband Willie; daughter, Kristina Landrum and husband, Matt; grandchildren, Nate and Anna Eickenhorst, Lorelei and soon to be born, Levi Landrum; brother, Steve Smith; sister, Pat Milkovich and husband Butch; brother, Ed Smith and wife Cindy; nephews, Matt Milkovich and wife Amber, Ben Milkovich, and Jake Smith; nieces, Rachel Dyal and husband Jimmy, and Toree Smith; and numerous relatives and friends. In lieu of flowers, Rob's family requests that you kindly consider a donation in his name to the National Multiple Sclerosis Society. Go to www.nationalmssociety.org and click on donate. Then choose "Give in Honor or Memory" and complete the required information. An acknowledgement will be sent to the person you indicate on the form.

Robert (Rob) Brian Smith, age 61, passed away early in the morning of Thursday, September 21, 2017 after a long battle with Multiple Sclerosis. He was born on April 30, 1956 in Charleston, South Carolina. Rob grew up in the Walled Lake area... View Obituary & Service Information

The family of Robert Brian Smith created this Life Tributes page to make it easy to share your memories.

Send flowers to the Smith family.