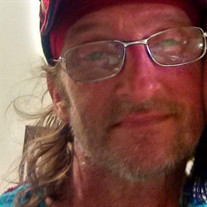 Ricky Lawrence Holt, 47, went home to be with his Lord and Savior on August 2, 2017, while surrounded by his beloved family. He is preceded in death by son Brandon Holt; father Lawrence Holt; step-father David Wells; father-in-law Thomas Hanes SR; and great granddaughter Rylee Huppe. He was born on June 1, 1970 in Center, Texas. During his childhood, he was raised in Hudson, Texas. He attended taekwondo and became a black belt. He loved going to the beach with his family during the summer. He would race on the back roads of Lufkin when he was a teenager. Ricky also loved to rebuild cars with his dad. In his faith, God came first above everyone, knowing the bible word for word. His passion was playing his guitar and writing his own music which may be heard on the radio today. On December 15, 1988, Ricky married his best friend and together they had three beautiful children. These three children would later go on and make the number one Pawpaw to eight grandchildren which made his world go around. Ricky would do anything for anyone in his family granting him to be known as 'MISTER FIX IT". In his professional career, Ricky worked and retired as a truck driver in the oil field. He was also the publisher of Know the Times ([email protected]). Ricky is survived by his wife of 28 1/2 years, Melissa Holt; children Ashley and her husband Jason Dennis, Adam and his wife Robin Holt, Vanessa Rowland, and Chelsy and her husband Thomas Williams; grandchildren Dylan and Angela Huppe, Mason, Logan, Bre'Anna, and Alyssa Dennis, Karlie Williams, Shane and Serenity Holt; great grandchildren Braylen and Laken Huppe; mother Helen Wells; siblings Shawna Anderson, Corey and his wife Betty holt, and Kalin Brister; mother-in-law Marlin Hanes; brothers-in-law Chris and Thomas Hanes; and many other beloved family members. Ricky leaves behind so many memories filled with lots of love and laughter. ‘Til we meet again my angel!

Ricky Lawrence Holt, 47, went home to be with his Lord and Savior on August 2, 2017, while surrounded by his beloved family. He is preceded in death by son Brandon Holt; father Lawrence Holt; step-father David Wells; father-in-law Thomas Hanes... View Obituary & Service Information

The family of Ricky Lawrence Holt created this Life Tributes page to make it easy to share your memories.

Ricky Lawrence Holt, 47, went home to be with his Lord and Savior...

Send flowers to the Holt family.