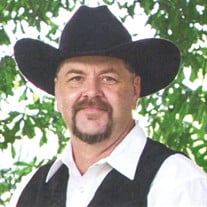 Richard Andrew Price (ANDY) 46, passed away on Monday, November 14, 2016 at 10:02 AM as he lost his battle with end-stage liver disease. He passed in the loving arms of his soul-mate, Christy. He lived on Casey’s Ridge and was a longtime resident of the Huffman-New Caney area. He was an Ironworker by trade and a member of the Ironworkers Union Local 135. Andy was a quick-witted joker with bright green eyes and a deep, loud laugh. Andy was born in Channelview, TX to J.R. and Linda Price on February 2, 1970. He attended elementary school in Huffman. He then moved to Houston where he attended C.E. King Middle and High School. Andy left school to join the workforce when he learned he was to be a father. Three boys soon followed, Zachary, Justin and Chase. The family was living in New Mexico at that time. He returned to Texas soon afterward. He worked several welding and odd jobs and time flew by quickly, It was in 2005 that he started dating Christina Landrum and they became inseparable. This added three more children to the count, Joe, Martha and Joanna Renae Price. He began school to become an ironworker and successfully completed it in 2012. He joined the Local 135 and remained there until his death. He is preceded in death by his beloved father, J.R. Price, his fraternal grandparents, Prater and Fannie Mae Price and his maternal grandfather, Hugh Jordan. Richard Price is survived by his mother Linda Hugh Jordan and his maternal grandmother Marie Peacock, as well as his three brothers, Kyle Matthew, James Ray and Phillip L. Price. He also leaves behind four children, Zach, Justin, Chase and Joanna Price, as well as two stepchildren, Joe Hammond and Martha Landrum. He is also survived by one granddaughter as well as one nephew, numerous nieces, great-nephews, loved ones, friends and co-workers. Andy was an intelligent and loving man with a good joke, a warm smile and a cold beer for everyone he came into contact with. He loved to play the guitar and was a very talented artist. He was a true inspiration to his family and will be sorely missed and faithfully mourned forever.

Richard Andrew Price (ANDY) 46, passed away on Monday, November 14, 2016 at 10:02 AM as he lost his battle with end-stage liver disease. He passed in the loving arms of his soul-mate, Christy. He lived on Casey&#8217;s Ridge and was a longtime resident... View Obituary & Service Information

The family of Richard Andrew Price created this Life Tributes page to make it easy to share your memories.

Send flowers to the Price family.