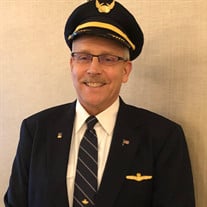 Richard “Todd” Greene, age 59, passed away at his home in Magnolia, Texas on Friday, March 22, 2019. He was born on March 31, 1959 in Bangor, Maine to Richard and Joanne Greene. Todd considered himself an Air Force brat, with his dad being a pilot and having the family move many times across the country. They also lived in the Philippines in the early 60’s. After retirement from the Air Force, his dad settled the family in Lewisville, Texas, where Todd attended and graduated from Lewisville High School. He received his degree in Aviation from Northeast Louisiana University in Monroe. To fund his personal pilot training and ratings, he worked various jobs, ultimately allowing him to achieve his goal of becoming a commercial airline pilot. Todd became a charter pilot with Fleeman Aviation in Monroe, then an Air Charter Pilot in Greenville, Mississippi. In 1985, he went into the commercial field at Royale Airlines, then in 1987 to Continental/United Airlines, where he devoted 32 years. He was a member of the Airline Pilots Association and Boy Scouts of America. He took great pride in the Boy Scouts having been a former Den and Troop Leader and a member of the distinguished “Order of the Arrow.” Todd was a strong man faith, believed in Jesus Christ as his Lord and Savior, and was a member of The Woodlands Church. He was preceded in death by his parents; his brother, Joseph Scott Greene, U.S. Army; and his pets, Zoe, Maggie, Bella, and Daisy. He is survived by his wife, Karen Frazier Greene; children, Karen “Allison” Greene (28), Michael Todd Greene (26), and Abby Lauren Greene (24); grandchildren, Jaxon Ryan (5) and Brooke Monroe (3) St. John; sister, Lynne Holland (Dallas, Texas); nieces, Tara and Tricia; great nieces and nephews, John, Emily, Michael, Sarah, Matthew, Olivia, Katherine, Eathan, Nolan; numerous aunts, uncles, and cousins; and pets, Molly, Cowboy, Max, and Katy. Friends are invited to visit with the family at 10:00 A.M. Friday, March 29, 2019 in the Chapel of the Pines at Woodlands Church, 1 Fellowship Dr, Conroe, Texas 77384. The funeral service will be following at 11:00 A.M. The graveside and interment service will be held at 3 PM Saturday, March 30, 2019 in Sibley Cemetery, 2091 Hwy 145, Choudrant, Louisiana 71227.

The family of Richard Todd Greene created this Life Tributes page to make it easy to share your memories.

Richard “Todd” Greene, age 59, passed away at his home in Magnolia,...

Send flowers to the Greene family.