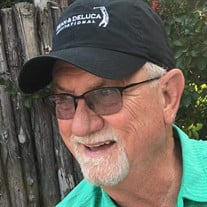 Rick Coe, 64, of Odessa, TX passed away on Saturday, February 10, 2018 at M D Anderson Cancer Center, Houston, TX. Rick was born October 11, 1953 in Odessa, Texas, the son of Coy and Joan Coe. Rick graduated from McCamey High School and attended East Central University in Ada, Oklahoma. Rick joined Baker Hughes in 1977 in the Permian Basin and six months ago celebrated 40 years of service at Baker Oil Tools. Rick’s dedicated service reflects his passion, commitment and respect within the Baker organization as well as across the oil and gas industry. He was a great friend to the Permian Basin community and will be missed by those who have had the pleasure of knowing him. The Odessa Jackalopes organization and players were a large part of Rick’s life. If the Jacks were in town, you could find him at “his” middle table in the Center Ice Club. He rarely missed a game. Rick started the Jackalopes Annual Shriners’ Weekend, where proceeds of the benefit went to the children at the Shriners Hospitals. Since 2008, the Shriners and Jackalopes have been able to raise over $500,000 for the Shriners Hospital. Rick also helped organize the Jackalopes annual golf tournament that has been renamed the Rick Coe Classic. The Jackalopes look to continue both events and honor Rick’s legacy for years to come. Rick joined the Masonic Lodge in 1999 and was a 32nd Degree Scottish Rite Mason and a member of the El Maida and Suez Temples. Rick was affiliated with the Odessa Shrine Club, serving as past president for two terms. He was dedicated to raising money for the Shriners Children’s Hospital of Houston, TX and Shriners Burn Hospital, Galveston TX. He was the driving force and coordinator of the Jackalopes Fund Raising benefiting the Shriners Children’s Hospital. Rick worked hard and helped to coordinate the Odessa Shrine Club’s Golf Tournament each year. Rick is survived by his wife, Sandy Williams-Coe; stepson, Shawn Williams and wife Heather of Post, TX; grandchildren, Matthew Williams and wife Amanda of Odessa, TX; Derrick Williams of Jacksonville, FL, and Tiffany Williams of Post, TX; brother, Alan Coe and wife Kim of Amarillo, TX; nephew, Seth Coe and wife Lindsay of Dodge City, KS and their children, Jayton, LilyAnne and Boston; niece, Sara Bass and husband Christian of Amarillo, TX and their children, Jedidiah and Wren. As well as, his uncles, aunts, cousins and many close friends. With special mention of Holly Hickman Bowman of Morristown, NJ and of Steven Hickman of Odessa, TX. Rick is preceded in death by his parents, Coy and Joan Coe. The family requests in lieu of flowers, donations be made to: Shriners Hospital Houston, Attn: Patient Services, 6977 Main Street, Houston, TX 77030-3701

The family of Richard Neal Coe created this Life Tributes page to make it easy to share your memories.

Rick Coe, 64, of Odessa, TX passed away on Saturday, February...

Send flowers to the Coe family.