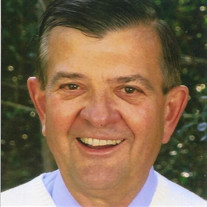 Raymond Lee Poltorak was born on February 18, 1944, in Buffalo, New York, to Raymond and Alfreda Poltorak and passed away in Ocala, Florida, on September 4, 2019. Ray was raised in Buffalo and pursued his passion for learning at the University of Buffalo (UB), receiving both his BA and MBA. Ray met his future wife Beverley at UB, and they were married on November 20, 1965. In 1968 Ray, Beverley, and new daughter Jennifer moved to Cincinnati, Ohio, where he began his career in Industrial Marketing. A subsequent move to Mt Lebanon, Pennsylvania, added their daughter Jill to the family, and where they became lifetime Pittsburgh Steelers fans. Ray had various careers with Calgon, Merck, Fleetguard, ABS, N.A.C.E., finally retiring from Eagle Burgmann. When Ray’s business travels permitted he served as adjunct professor at University of Houston, teaching International Marketing. He continued to write articles for business publications, newsletters, and co- authored one book. On April 13, 2012, Ray was awarded the Alumnae Volunteer Recognition Award by the University of Buffalo and he and Beverley traveled there to receive the award, visiting with their best man and many of his fraternity brothers. After moving to April Sound in 1992 Ray became active in the community and after retirement he headed the Woodlands Chapter of SCORE, mentoring small business owners to help them grow their businesses. He was a member of the April Sound Men’s Club, Outreach and Membership committees, Golf Cart Angels, MCCS Auxiliary, First United Methodist Church’s Men’s Prayer Breakfast, participated in lunch and dinner groups, and playing bridge. Ray also wrote the monthly Veteran of the Month article for the ASPOA newsletter. A flag flies in his honor at the Memory Park in Montgomery. Ray and Beverley loved to travel. Ray loved art, the opera, and historical settings. Among his favorite trips was his 65th birthday trip to New York City to see the Metropolitan Opera. They made numerous trips to St Maarten, Bruges, and most recently to visit the American Cemetery in Normandy. Many of the travels were to visit lifetime UB, Pittsburgh, and Dallas friends as well as family. Ray is survived by his wife Beverley of almost 54 years; his daughters, Jennifer and Jill; and grandchildren, Maison Leigh, Logan Anne, Griffin, Heath and Tate. He is also survived by his mother-in-law Gayle Bolles; sister, Patricia Schunke (Hank); sisters-in-law, Linda Jamison (Greg), Betsy Pertierra; and numerous relatives, friends, UB Alumnae and fraternity brothers. The family requests that in lieu of flowers, donations can be made in Ray’s memory to First United Methodist Church in Conroe for the benefit of the Choral Intern Program or the Gathering Place, 4308 West Davis, Conroe, TX 77304, or to the University of Buffalo. Foundation Inc. P.O. Box 730, Buffalo, NY 14226. A memorial service will be held at 11:00 AM on Saturday, September 21, 2019 at First Methodist Church of Conroe, 4308 W. Davis St, Conroe, Texas 77304.

Raymond Lee Poltorak was born on February 18, 1944, in Buffalo, New York, to Raymond and Alfreda Poltorak and passed away in Ocala, Florida, on September 4, 2019. Ray was raised in Buffalo and pursued his passion for learning at the University... View Obituary & Service Information

The family of Raymond Lee Poltorak created this Life Tributes page to make it easy to share your memories.

Send flowers to the Poltorak family.