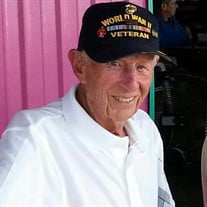 Philip H. Lawshe, age 94, passed away on Tuesday, April 2, 2019 in Willis, Texas. He was born on March 6, 1925 in Newark, New Jersey to Ruth Ann and Errol Lawshe. At the age of 17, Philip was drafted into the United States Marine Corp during World War II. He was a part of the Second Division in the Pacific. Afterwards, he went to Rutgers University in Poultry Husbandry. He married the love of his life, Jeanne Wolf, and together they created a beautiful family and life. His daughter Denise stated, “He was more than just a dad. By his kind, nurturing, and giving heart, he led by example not only for his family but to the many lives he touched. We could have not been more blessed”. He will be missed very much. Philip was a Sales Representative for “Becton Dickinson” for many years and later owned two restaurants, “Little Bit of Italy” and “Pizza Plus” in Spring Branch and Katy, Texas respectively. Phil never met a stranger and always wore his World War II Marine Veteran’s hat with great pride. Everyday people noticed him and would regularly show their appreciation for his military service. He was most impressed with the children who came up to him. Philip was preceded in death by his parents; and his son, Craig H. Lawshe. He is survived by his wife of 72 years, Jeanne Lawshe (92); daughter, Denise Lawshe Newport; Son’s wife, Shelia Lawshe; grandchildren, Hans Lawshe, Karah Dybala, Jessica Holland, Amber Lawshe, Justin Trueheart, Chad Trueheart, Clint Trueheart; great-grandchildren, Jenna Trueheart and Lilia Lawshe. In lieu of flowers, the family asks that donations and contributions be made to the Cancer Research Institute (Cancer Immunotherapy). A memorial service will be held to celebrate his life at the Houston National Cemetery, 12:45 PM on Friday, April 12, 2019. The address is 10410 Veterans Memorial Dr., Houston, TX 77038. Everyone is asked to line up their automobiles 15 minutes earlier to go back into the Cemetery. A private family only gathering will be held afterwards.

Philip H. Lawshe, age 94, passed away on Tuesday, April 2, 2019 in Willis, Texas. He was born on March 6, 1925 in Newark, New Jersey to Ruth Ann and Errol Lawshe. At the age of 17, Philip was drafted into the United States Marine Corp during... View Obituary & Service Information

The family of Philip H. Lawshe created this Life Tributes page to make it easy to share your memories.

Send flowers to the Lawshe family.