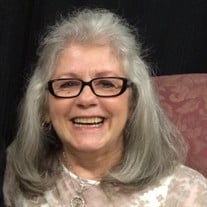 PATRICIA ANN (GUFFEY) CHAMPION Patricia was called home to be with her savior Jesus Christ on March 31, 2016 at the age of 71. She was born in Paris, TN to Alvis and Mildred Guffey and shortly thereafter the family moved to Muskogee, OK where Patricia grew up and graduated high school. Patricia excelled in all of her activities at Central High School. She was an Honor Student in the Class of 61. She loved being on the Debate Team, and served as the Editor of the School News Paper. Also, she was the Editor of the 1963’ Year Book Staff. Believing on Jesus Christ in childhood, she became active in the choir, youth group and as a Sunday school teacher of First Baptist Church of Muskogee. Being moved by her study of the Holy Bible and surrender to prepare for missionary work, Patricia enrolled at Oklahoma Baptist University in the fall of 1963. Here, she taught children in an Indian mission outside of Shawnee, Oklahoma. The following year she returned to Muskogee to work and commute to Northeastern State University in Tahlequah, Oklahoma. She again taught children of First Baptist of Muskogee. Immediately afterward, Pat met Harold Lee Champion, a Christian student at Bacone Junior College, while welcoming him to membership to the church. After many college Bible studies and fellowships, the two began ministering in nursing homes and churches before realizing that God had called them to unite in marriage and work together for life. They were married August 27, 1965, and began their first year in South Houston, TX. Through the years Pat worked and served as a pastor’s wife, women’s evangelism worker, Instructor of a Deaf Bible College, office manager, and Certified Medical Coder. Having experienced heart and autoimmune issues for the first 54 years of life, Patricia began on a regimen of biological sugars and overcame her autoimmune diseases for thirteen years before her previous cardiac damages escalated. Patricia excelled in the field of Medical Coding working for various firms, Vanderbilt and Health Corporation of America (HCA). Her involvement with the Professional Coders of Nashville, TN in early 2000 generated an explosive growth in this local chapter to become nationally recognized by the American Association of Professional Coders. Pat retired in 2013 from HCA after having a debilitating stroke. She then joined her husband in the initiation of GlycoScience Institute in Houston, in Jan 2016. She began the Research Data Entry. Her church membership is at the Music City Baptist Church in Mt. Juliet, TN, Ben Graham, pastor. She worked with her husband in Burmese missions with the Chin Baptist Church in Nashville, Timothy Peng, pastor. She was able to travel to churches promoting Burmese Missions. She and her husband were visiting the Christchurch Baptist Fellowship while in Houston. Johnny Pope, pastor. Patricia Ann and Harold Lee Champion celebrated their Fiftieth year in marriage while living in Nashville, Tennessee for the past 25 years, August 27, 2015. Her life was a profound Christian testimony to all that she touched around the world. No man could have a better wife. No family could have a better example of Christ. Patricia is preceded in her departure by her parents Alvis Martin Guffey and Mildred Guffey of Oklahoma. Patricia Ann Champion is survived by and now waiting in Heaven for her husband Harold Lee Champion. 3 Children; Matthew Todd Champion (Nashville, TN), Rebecca Leanne Holmes & Tommy (Big Spring, TX), Mark Lee Champion & Julie (Nashville, TN) 4 Grandchildren; Luke LeGrand & Lexi, Victoria Bare & Casey, Noah LeGrand, Zachary Holmes. 3 Great Grand Children; Natalie Grace Legrand, Isaac Benjamin LeGrand, Brooklyn Bare. 1 Sister Kelli Davidson, 3 Care Children; Christopher Ruch, Robbie and Dana Benedict. The family had a private graveside interment at Carmen Nelson Bostick Cemetery 12317 Holderieth Rd Tomball TX 77375 on Sunday April 3, 2016. Those wishing to leave online memorials and tributes to the family may do so at www.eickenhorstfuneral.com and if you would like to help continue Patricia and HL’s mission work in Christ donations may be made to: *GlycoScience Institute: www.GlycoScienceInstitute.com *Burma/Myanmar Missions - Dr. HL Champion 17911 Ridge Top Drive - Houston, TX 77090

PATRICIA ANN (GUFFEY) CHAMPION Patricia was called home to be with her savior Jesus Christ on March 31, 2016 at the age of 71. She was born in Paris, TN to Alvis and Mildred Guffey and shortly thereafter the family moved to Muskogee, OK where... View Obituary & Service Information

The family of Patricia Ann Champion created this Life Tributes page to make it easy to share your memories.

PATRICIA ANN (GUFFEY) CHAMPION
Patricia was called home to be...

Send flowers to the Champion family.