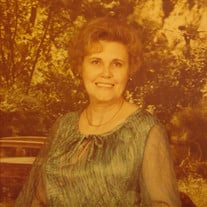 Norma Maxine Lewis was born Dec. 31, 1925 in Woodlawn, Louisiana, the daughter of Lemuel and Mary Jane Lewis. Norma had one sibling, a sister, Syntha Kay. Kay was 16 years younger than Norma and was more like a daughter than a sister. Kay had severe diabetes and much of Norma’s time throughout Kay’s life was involved in her care. Norma became a committed Christian, accepting Jesus as her Savior while still a child. As a teenager she attended a tent revival in Lake Charles, after which she became a founding member of Glad Tidings Assembly of God in Lake Charles. Norma was the last surviving original member of Glad Tidings. Norma married Albert William Perez in 1965. She was forty years old before marrying the first time and she and Albert were only together for three years before Albert died of a massive heart attack in 1968. In 1981 Norma’s brother in law, Ernest Everage became friends with Lucas James while Lucas was superintendent of construction on the Nelson Station plant in Lake Charles. Ernest invited Lucas home for dinner and invited Norma also. Ernest’s match making resulted in Lucas and Norma getting married three months later. They were constant companions until Lucas passed in July of 2017. Norma is survived by cousins Van Rembert and wife Henri and Betty Trahan. She is survived by step-sons Alvie King and wife Sharon and Nelson James and wife Rosalind. She was grandmother to 19 children, a great grandmother and great-great grandmother. A memorial service will be held for Norma at Eickenhorst Funeral Home in Conroe, Texas at 3 p.m. on Friday, May 18, preceded by a viewing and visitation at 2 p.m. A graveside service will be held at noon on Saturday May 19 at Lyles Cemetery, Oberlin, La. AMAZING GRACE Amazing grace, how sweet the sound, that saved a wretch like me! I once was lost, but now I’m found, was blind, but now I see. Through many dangers, toils and snares, I have already come; ‘Tis grace hath brought me safe thus far, and grace will lead me home. When we’ve been there ten thousand years, bright shining as the sun, we’ve no less days to sing God’s praise, than when we’ve first begun.

Norma Maxine Lewis was born Dec. 31, 1925 in Woodlawn, Louisiana, the daughter of Lemuel and Mary Jane Lewis. Norma had one sibling, a sister, Syntha Kay. Kay was 16 years younger than Norma and was more like a daughter than a sister. Kay had... View Obituary & Service Information

The family of Norma Maxine Lewis Perez James created this Life Tributes page to make it easy to share your memories.