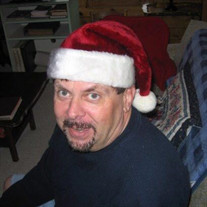 Mitchell Lee Mallory, age 61, passed away on February 2, 2016. He was born on April 29, 1954 in So. Charleston, WV. At age 4 years old, Mitch heard the song, “Tom Dooley” on the radio, walked over to the piano and played it with two hands. So in 1958 at the age of 4 ½ before he could read, write or even talk well, he began lessons with Ms. Ruda at Ruda School of Music in Charleston, WV. She accepted him at such an early age because he had perfect pitch, could play by ear and he had the same birthday as her son. Mitch loved music and took both piano and accordion lessons. He was always the last one to play at recital time. At his first recital, he played his piece, then got up and bowed as Ms. Ruda had taught him. When everyone clapped, he sat back down and played it again. After the third time, Ms. Ruda got him and walked him back to his seat. In Jr. High, Mitch played piano and trumpet. He was also an avid member of the Civil Air Patrol. His musicianship continued in High School playing piano, the bass drum in marching band and the string bass in concert band. In high school, Mitch was a very slim young man who could barely carry or see over that bass drum. The band director had him play that thing because Mitch “was the only one in the band who could keep a steady beat!” After graduating, he traveled Europe playing the string bass with America’s Youth in concert. That fall, he attended Bob Jones University continuing his musical studies by taking organ. After Bob Jones, Mitch attended LSU and received his Bachelors in Business. When asked by his mother why he didn’t continue Piano/organ at LSU, she was told he would have to join the choir and he didn’t want to sing in any choir! Following graduation in 1976, he attended Delgado Community College in New Orleans and received an Associate Degree in Mortuary Science. After working in the funeral business for 2 years, he began a life-long music ministry in various churches and cities. He began playing in church at age 10. So, he served the Lord for 49 years as a church musician….and a phenomenal one at that. His last place of service was Hillcrest Baptist in Austin, Texas. Mitch loved family. He loved his wife and son and was a very proud Poppa to his grandboys. The last few months of his life he had a date with his Momma every Sunday night by phone. He adored his sister, always telling her he loved her with her replying “I love you more!” Truth be known, they probably argued over who loved whom more! Mitch will be mostly remembered for three things; his faith, his phenomenal musicianship and his corny, quirky sense of humor. He will be greatly missed! He was preceded in death by his grandparents, Lee Roy and Myrtle Mae (Hill) Mallory and Rome Clifton and Beatrice Lee (Scarberry) Bays; aunts, Freda Mae (Bays) Fox and Alice Jo (Sweeney) Bays, all of So. Charleston, WV; granddaughter, Selah Grace Mallory of Conroe; uncle, Lee “Bubby” Mallory of Raleigh, NC; and father-in-law, Buck Bennett of Stone Mountain, GA. He is survived by his loving wife of 37 years, Connie Sue (Bennett) Mallory; son, David Clifton and wife Michelle Dawn (Bibb) of Conroe; three grandsons, Ethan Alexander Mallory (age 5), Joel Isaac Mallory (age 4) and Isiah Andrew Mallory ( age 21 mos); parents, Burl Andrew and Phyllis Olive (Bays) Mallory; sister, Tianna Mallory and (Champell) Butler of St. Albans, WV; and nephew, John Thomas Harmon, IV and wife Kelly of Luling, LA.

The family of Mitchell Lee Mallory created this Life Tributes page to make it easy to share your memories.

Send flowers to the Mallory family.