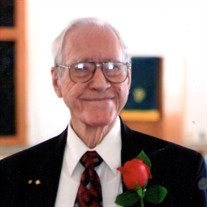 Milton Frank Baker, age 97, died on Saturday, March 4, 2017. He was born on January 24, 1920 in Oklahoma City, Oklahoma to Frank Milton and Estelle Baker. He received his BS degree in Physics from Central State University in Edmond, Oklahoma before joining the Army Air Corp, serving in the Philippine Theater in Radar Repair. He had worked for NASA as an Electronics Engineer. Milton was a past Vice President of the Pasadena Radio Club and had been on the Emergency Radio Teams of the Arlington Radio Club and for the City of Pasadena. He was a past Communications Officer with the Civil Air Patrol and was active in the United States Power Squadron and the Ed White Post 421 of the American Legion. A man of faith, he was a member of Aldersgate Methodist Church in Arlington, Texas before transferring his membership to the First United Methodist Church of Pasadena, where he had been an usher for over 40 years and had served on their Board. Milton was a longtime Mason and was very active in Masonry throughout his life. He served as Worshipful Master of Pasadena Lodge #1155 and Clear Lake Lodge #1417. He also served as Worthy Patron of Pasadena Chapter #711 and Seabrook Chapter #1096 Order of the Eastern Star. He was York and Scottish Rite as well as being very active in Moslah and Arabia Shrine. Milton was also a Past Patron of Baytown Court #1, a past Royal Patron of Louisiana, Order of the Amaranth and a strong supporter of the International Order of the Rainbow for Girls. His posts and activities within these organizations are too numerous to mention but none the less important to him. He is survived by his wife, Coy Nella McCoy Baker; daughter, Deborah Lynn Baker Gannaway and husband Robert; son, William Mack Baker and wife, Shirley; grandchildren, Brian Alan Baker, Jeffrey Scot Baker and wife Jessica, Breanne Rochelle Gannaway; Kelyna Michelle Gannaway and Erik Allan Hillman; and his great grandson, Oliver Scot Baker. Friends are invited to visit with the family from 6 pm until 8 pm on Wednesday, March 8, 2017 at the First United Methodist Church of Pasadena, 1062 Fairmont Parkway, Pasadena, Texas. A funeral service will be held at 2 pm on Thursday, March 10, 2017 at the First United Methodist Church of Pasadena. A short service will follow at Grandview Memorial Park.

The family of Milton Frank Baker created this Life Tributes page to make it easy to share your memories.

Send flowers to the Baker family.