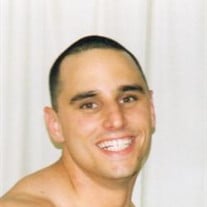 Michael Edward Jedrzynski, age 36, died unexpectedly on November 14, 2012 as the result of a motor vehicle accident in Conroe, Texas. He was born on September 17, 1976 in Worcester, Massachusetts to Peter and Laurie Jedrzynski. From the beginning, Michael was a fun loving, very outspoken, intelligent boy. He spent every woken moment with his two brothers, William Elfred and Daniel Jedrzynski. The three of them were inseparable. Michael was very family oriented from a very young age. Michael went to Brownsboro school all of his life and was placed on the varsity football team as a very valued running back. Michael received a full academic scholarship to Baylor University in Waco, Texas but decided to serve his country and care for his family. In 1994, Michael enlisted in the US Army, where he excelled in multiple specialties, including being an airborne sniper, and achieved the rank of Sargent in a very short 6 year span. After serving his country, Michael went on a fast track management program in the food service industry which allowed him to be closer to home and his family. Michael was preceded in death by his two brothers, Peter and William Jedrzynski. He is survived by his loving children, Jorden, Noah, Alaina and Dylan; parents, Peter and Laurie; grandparents, William Edward and Elfrieda Jedrzynski; brother, Daniel; partner, Rachael Key; as well as several aunts, uncles, nieces, nephews and multiple cousins. When Mike was born, there was much joy, For Pete and Laurie their second boy. He was son, a brother, a father and a friend. With Mike in your life, you could depend that he would be there without a doubt, to lend a hand, to help you out. He had a smile that would lure you in, And look at you with his big grin. From bicycles to motorbikes He gave his all, whatever his likes. Although big and strong, He was sensitive too. Always a yes ma'am and Momma, I love you. Handy in the kitchen to cook up a meal Always helping out, whatever the deal. Passionate about life and being a soldier too, Defending our country and me and you. He easily made friends wherever he'd go, Across the country or here in Conroe. Life long memories that can't be erased, Think of them and you'll see his face. He was a kind and caring man, If you're in his life you know where you stand. He loved deeply, sometimes too much, Lessons learned of life and such. A hard worker right to the end Coming home to family and friends. He leaves the gifts of his children behind, To carry on throughout all time. He touched all our lives in a different way, So when you leave here today� Remember to celebrate the gift of life. Don't be too late, To show your love, compassion and fears To the ones you love so dear. In Mike's memory live your life Full of laughter, love and be nice. Always dance like no one's watching, Laugh like no one's listening, Live life to the fullest with No regrets. Rest in Peace Michael

Michael Edward Jedrzynski, age 36, died unexpectedly on November 14, 2012 as the result of a motor vehicle accident in Conroe, Texas. He was born on September 17, 1976 in Worcester, Massachusetts to Peter and Laurie Jedrzynski. From the beginning,... View Obituary & Service Information

The family of Michael Edward Jedrzynski created this Life Tributes page to make it easy to share your memories.

Send flowers to the Jedrzynski family.