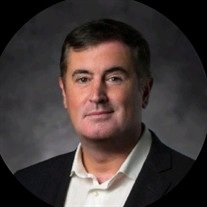 Michael Paul Davidson, age 45, passed away on February 7, 2020 in The Woodlands, Texas. He was born on December 3, 1974 in Modbury, SA, Australia, and grew up in Forrestfield, WA, Australia. During college, he worked at McDonald’s where he met his future wife, Elizabeth Plummer, whom he eventually married in 1998. He earned a Bachelor of Science with Honors and worked as a Geophysicist for Fugro, Australia. Their son, Jared, was born in 2001, followed by their daughter, Hannah, in 2002. In 2003, they moved to Houston, Texas where their second daughter, Sarah, was born in 2007. Along with building his family, Michael built his career as a Geophysicist for Fugro, Senior Geophysicist and Senior Data Analyst for Conoco Phillips, and Data Science Manager for Southwestern Energy; meanwhile earning a Masters Degree in Statistics. He was also a strong believer in Jesus Christ and was a member of Como Baptist Church, Sugar Creek Baptist Church, and Woodlands Church, where he and Elizabeth taught many two year old boys and girls. Michael was preceded in death by his parents, Fiona Rosemary (Stott) and Robert Davidson; brother, Mark Graham Davidson. He is survived by his wife, Elizabeth; children, Jared, Hannah and Sarah; sister, Julie and husband Adrian McFarlane. A Celebration of Life will be held at 10:00 AM on Saturday, February 15, 2020 at WoodsEdge Community Church, 25333 Gosling Rd, Spring, Texas 77389, in the Student Ministry building. In lieu of flowers, donations and contributions may be made to the Brain Aneurysm Foundation. (http://give.bafound.org/goto/MichaelDavidson) Also, please consider making a donation to the girls college fund at https://www.gofundme.com/f/support-mikes-goal-to-send-his-girls-to-college?utm_medium=copy_link&utm_source=customer&utm_campaign=p_lico+share-sheet

Michael Paul Davidson, age 45, passed away on February 7, 2020 in The Woodlands, Texas. He was born on December 3, 1974 in Modbury, SA, Australia, and grew up in Forrestfield, WA, Australia. During college, he worked at McDonald&#8217;s where... View Obituary & Service Information

The family of Michael Paul Davidson created this Life Tributes page to make it easy to share your memories.

Send flowers to the Davidson family.