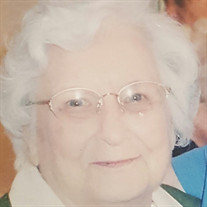 Melissia Irene Bradshaw Lester, entered into eternal rest on January 10, 2016. Irene was born on March 1, 1922 in Nacogdoches County. She is preceded in death by her husband of 52 years, O.L. (Red) Lester; her son, Ray Lester; her parents, Jim and Mattie B Bradshaw; and siblings, Leslie R. Bradshaw and Ethylene Overall. She is survived by her daughter, Barbara and husband Ron Hulsey. She was Mammie to grandchildren Wade and wife Brannon Hulsey, Rachel and husband Brett Carnley, Abigail Lester and Jeff Keeler, Jacob and wife Jessie Lester, and Madalyn Lester. She also was blessed with ten great-grandchildren: Samuel and Ava Hulsey, Lily and William Guy Carnley, Aiden, Wyatt, Avery and Rhyder Lester, and Kinsley and Vaida Rue Lester. She is also survived by nine nieces and nephews and their families: Rodney Bradshaw, Kim Dolan, David Overall, Sue Cowling, Butch Lester, Deidre Lester, Keith Lester, Ronnie Mooman, and Jerry Mooman. She was also Mammie to special little neighbors (now grown) Rayenell, Gina and Becky Brasseaux, Hunter Blake and Duane and Amber Landry. Irene grew up in the small community of Nat, TX. She was a farmer’s daughter and grew up chopping cotton and knowing the meaning of hard work and lean times. Her attendance at Stephen F. Austin State Teachers College was interrupted by World War II and she moved to Houston to work at Hughes Tool while her future husband was in the 101st Airborne in Europe. They married on September 30, 1945 and made their home in Pasadena until Red’s death in 1997. They were active members of Second Baptist Church and South Main Baptist Church and Irene loved to hear the sermons of Billy Graham. She supported his Evangelistic Association her entire adult life. She learned to drive at age 60 because she had to, but only took routes that let her turn right. After Red’s death, she moved to Conroe and lived in a cute, pool cottage at Barbara and Ron’s. Then she lived with Ray and his children for a while, and it is there that she became an Astros fan. These were some of her happiest days. In later years, she found a church home at First Baptist Conroe and then was embraced by First Baptist Knoxville through their Assisted Living/Long Term Care Facility Program. She was a sweet, spunky lady who was always there for her family and friends. She will be greatly missed, but we are comforted in knowing she is free of pain and confusion and in the arms of her Lord and Savior. Special thanks go to Wade and his wife Brannon for the abiding love and care they provided these last 4 years while Barbara and Ron lived in the Caribbean. Mammie was indeed in good hands with them. The caregivers of Arbor Terrace Assisted Living and Westmoreland Health and Rehabilitations Center are also appreciated for the great care she received from them. A Graveside Service will be held at 10 am on Monday, January 18, 2016 at Houston National Cemetery, 10410 Veterans Memorial, Houston, TX. In lieu of flowers, donations may be made to: South Main Baptist Church, 4300 East Sam Houston Pkwy S, Pasadena, TX 77505, First Baptist Church, 600 N Main St, Conroe, TX 77301, First Baptist Church, 510 W Main St, Knoxville, TN 37902, Billy Graham Evangelistic Association, 1 Billy Graham Parkway, Charlotte, NC 28201.

Melissia Irene Bradshaw Lester, entered into eternal rest on January 10, 2016. Irene was born on March 1, 1922 in Nacogdoches County. She is preceded in death by her husband of 52 years, O.L. (Red) Lester; her son, Ray Lester; her parents,... View Obituary & Service Information

The family of Melissia Irene Lester created this Life Tributes page to make it easy to share your memories.

Send flowers to the Lester family.