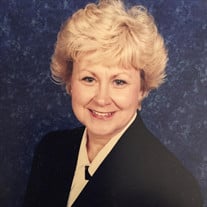 Mary Suzanne “Sue” Skrehot Whorton was born in Houston, Texas on July 1, 1945 to Palmae Cecilia Romair and David Bernard Skrehot. Suzanne died peacefully at home on February 20, 2021 at the age of 75. Suzanne lived the majority of her life in Houston and surrounding areas. She attended Assumption Catholic School in her early years and was a proud 1963 graduate of St. Pius X High School. Suzanne cherished the friendships and memories she made at St. Pius. Suzanne’s adult life focused on work, family, friends, God and church. After graduating from high school, Suzanne went to work at Prudential Insurance where she remained for many years. Through a neighbor she met, and later married, Glenn Edward Whorton, Sr. Together they had two sons, Glenn Edward Whorton, Jr. and Brian Jason Whorton. After the birth of her sons, Suzanne remained at home raising them and enjoying their many school activities. She volunteered at Christ the Redeemer Catholic Church and was especially proud to serve during the founding of the parish. When Suzanne’s boys were older, she returned to the outside workforce as a financial advisor at A. G. Edwards. Suzanne had a feisty, strong-willed spirit which she, no doubt, inherited from her mother! And, she loved to laugh! Enjoying life and meeting new people, Suzanne made a surprising career change and went to work as an airline hostess with Continental [now United] Airlines, where she remained until she retired. She loved to travel and spend time vacationing with her sons. In her spare time, Suzanne and her sons also bought houses to renovate and sell. After retiring from United, Suzanne enjoyed spending time with her grandchildren and her extended family. She often drove to visit her mother and her Aunt Rita in her prized Camaro, which Aunt Rita candidly referred to as Suzanne’s “yellow submarine”. In the finals years of her life Suzanne’s sons faithfully and lovingly cared for her, remaining by her side throughout her illness. The family extends gratitude to them, and to her cousin, Dr. Ronald R. Buescher, for his compassionate care. Suzanne is survived by her sons, Glenn Edward Whorton, Jr. and Brian Jason Whorton; her grandchildren, Rylee Alyssa Whorton and Kingston Lane Whorton; her brothers, David and Alan Skrehot and their respective wives Jan and Elda; her aunt, Rita (Romair) Buescher; numerous nieces, nephews, and cousins; and the extended Hanslik family. Suzanne was preceded in death by her former husband, Glenn Edward Whorton, Sr.; her father, David Bernard Skrehot; her mother, Palmae Cecilia Romair Skrehot Hanslik and Palmae’s late husband, Herman Hanslik; and her brother, Charles Timothy Nelms. A Funeral Mass will be held at 10:30 am on Thursday, March 4, 20201 at St. Edward Catholic Church, 2601 Spring-Stuebner Road, Spring, Texas 77389. Graveside services and committal will follow in Earthman's Resthaven Cemetery, 13102 North Freeway, Houston, Texas 77060. In lieu of flowers, please consider making a donation to the Alzheimer’s Foundation of America at www.alzfdn.org.

The family of Mary Suzanne "Sue" Skrehot Whorton created this Life Tributes page to make it easy to share your memories.

Send flowers to the Skrehot family.