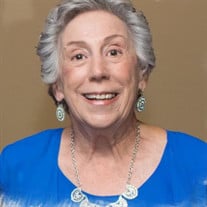 Mary Ellen Moran, age 75, passed away on November 19, 2018 in Houston, Texas, surrounded by her loving family. She was born on July 8, 1943 in New Orleans, the first child of Louis and Marian Porcello. She grew up in the Ninth Ward and attended Francis T. Nicholls High School, where she achieved great academic success. Unable to pursue her college dream, Mary Ellen began a career at the New Orleans Port of Embarkation where she met her future husband, Joseph, who passed in 2010. Upon his release from the army, the couple opened a restaurant in Metairie, the Come Back Inn, winning "Best of New Orleans" awards in several categories for the next 30 years. After selling the restaurant, she began a completely new career as a plumbing salesperson and continued her winning ways, earning national recognition for her efforts numerous times. All of this while ensuring her sons were focused on their education. She will be remembered affectionately as "Puddin" by her sons, William and Patrick; daughters-in-law, Julie and Jennifer; grandchildren, Kristi, Krissy, Madeline, Riley, Henry and Esme; great-grandchildren, Isla and Dylan; her sister, Jo Ann and her husband Phil Dell’Orfano; and many other friends and relatives too numerous to list here. Mary Ellen was an enthusiastic member of the Tree of Life Lutheran Church of Conroe, Texas. Her fondness for that community led her to request that donations to Tree of Life be made in lieu of flowers. Her grandchildren were her life. Volunteerism was her calling. Bridge was her game. Humor was her style. We will miss her immensely and she has left her mark on all of us. A Memorial Service will be at 3 PM on Saturday, December 1, 2018, at Tree of Life Lutheran Church, 3201 N. Loop 336 W. Conroe, Texas 77304 (www.treechurch.net). The service will be officiated by The Rev. Christopher E. Lake, whose guidance was a great comfort to her.

Mary Ellen Moran, age 75, passed away on November 19, 2018 in Houston, Texas, surrounded by her loving family. She was born on July 8, 1943 in New Orleans, the first child of Louis and Marian Porcello. She grew up in the Ninth Ward and attended... View Obituary & Service Information

The family of Mary Ellen Moran created this Life Tributes page to make it easy to share your memories.

Send flowers to the Moran family.