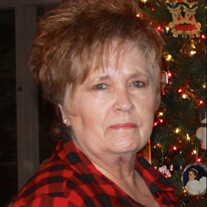 Lynda Carpenter Scott, 72, of Montgomery, Texas, passed away on March 2, 2020 surrounded by her daughter and two sons. Born in Orange, Texas on September 2, 1947, Lynda was the daughter of Inez and Julius (Tootie) Carpenter. She graduated from West Orange high school and was married soon after to Norman Scott. Together they had three children: David, Angela, and Damon. Lynda was a homemaker until her divorce in 1982, at which time she began working for State Farm Insurance. In 1996 she agreed to move and work for Randy Arnaud, a long-time family friend, and his newly acquired insurance business in Conroe, Texas. While in Conroe, Lynda became very knowledgeable and respected in the insurance field and as a result, was recruited to work for many insurance agents until her retirement. After retirement, she was able to work hand-in-hand with her daughter Angela in Angela’s candle manufacturing company, helping turn it into a very successful fundraising business. She also enjoyed traveling and visiting with family and friends. Lynda was preceded in death by her parents, Inez and Julius (Tootie) Carpenter; sisters Florence Sonnier and Nelda Morgan; brother Jerry Carpenter; and nephew John Sonnier. She is survived by her brothers David Carpenter of Orange and Robert Carpenter of Groves; her children David Scott & wife Alison, Angela Moore & husband Frank, and Damon Scott & wife Shelly, all of Montgomery; her grandchildren Chase Moore & wife Breanne of Montgomery, Kenny Saienni of Montgomery, Hayden Moore & wife Alyssa of Corpus Christi; Shelby Scott of Montgomery, Tyler Moore of Montgomery, Cade Scott & wife Emily of Fayetteville, AR; Brittney Moore of Montgomery, and Stran Scott of Montgomery; her great grandchildren Lane Moore, Rhett Moore, Grace Moore, and Lynna Moore; and niece, nephews, and a few close personal friends whom she loved dearly. At Lynda’s request, there will be no public funeral or memorial service. In her candid and honest words, “If you want to see me then come while I’m still alive”. These words will come as no surprise to those who knew her well. She and her feisty attitude will be missed by all who loved her.

Lynda Carpenter Scott, 72, of Montgomery, Texas, passed away on March 2, 2020 surrounded by her daughter and two sons. Born in Orange, Texas on September 2, 1947, Lynda was the daughter of Inez and Julius (Tootie) Carpenter. She graduated from... View Obituary & Service Information

The family of Lynda Faye Scott created this Life Tributes page to make it easy to share your memories.

Send flowers to the Scott family.