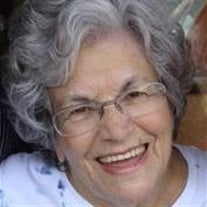 Louise Winifred Borges Redick, an 86-year-old who remained young at heart till her end, died Oct. 31, 2016, in Houston, where she had lived for many years. She was born in Providence, R.I., on Aug. 14, 1930, and was a first-generation American of Portuguese descent. Her parents, the late Dennis and Frances Borges, and other relatives hailed from the Azores, Portugal. She is survived by her four children, Denise Desroches Posey (Gary); Rod Desroches Jr. (Michele); Dennis Desroches (Teryll); Michelle Desroches Bell (Michael); seven grandchildren, Adam, Lauren, and Diana Desroches; Daniel and Devon Desroches; Tiffany Bell Anderson and Michael Bell; six great-grandchildren, Marissa, Lochlyn, Virginia, Carter, Landon and Dalton, and a host of friends, including one of some 72 years, Vivian Papineau, of Rumford, R.I. Although Louise was an only child, she enjoyed warm, lifelong relationships with an extended family of aunts, uncles, and cousins, many of whom survive her. In addition to her parents, she was predeceased by her second husband, Almond C. Brown, and her grandson, Michael Francis Posey. What Louise lacked in height – she was a petite woman of 4’10” – she more than made up for with a rich and abundant personality. She loved her children and grandchildren unconditionally and always took pleasure in making a positive impact on the lives of those around her. She had an uncanny knack for connecting with those from many walks of life, which led to friendships with people of all ages who lived in many different parts of the country. She particularly enjoyed traveling, seeing new places, and had ventured outside the United States on three occasions. She loved all kinds of dancing but especially square dancing because that called for wearing colorful dresses with full skirts. Friends always knew Louise as a woman who liked to dress up, shop, and wear the latest in fashions and jewelry. If ever there was a party or an outing to attend, Louise was sure to be there. Louise was also an accomplished piano player as well as a keen supporter of the fine arts. Throughout her lifetime, she enjoyed touring museums and attending live performances in theaters and symphony halls. As the fun-loving woman she was, Louise was known for liking to dine out. She also had a wicked sweet tooth, most especially for Klondike bars, which she stocked in her freezer in surprisingly large quantities. She was an avid reader, as well as a skilled player at all kinds of card games. In the past three years, Louise and a friend, Dorothy Harrison of Houston, sewed fleece scarves for patients at Texas Children’s Hospital. Together, they made and donated more than 6,000 scarves. Perhaps most importantly, however, Louise was a follower of Christ and believed in life eternal. A memorial mass will be said for her at St. Cecilia Catholic Church, 11720 Joan of Arc Drive in Houston on Friday, November 18, 2016 at 12:00 p.m. A reception will be held in the parish hall for family and friends after the mass. Donations in Louise’s memory can be made to Texas Children’s Hospital, Office of Development, Suite 5214, P.O. Box 300630, Houston, Texas 77230-0630.

Louise Winifred Borges Redick, an 86-year-old who remained young at heart till her end, died Oct. 31, 2016, in Houston, where she had lived for many years. She was born in Providence, R.I., on Aug. 14, 1930, and was a first-generation American... View Obituary & Service Information

The family of Louise Winifred Borges Redick created this Life Tributes page to make it easy to share your memories.

Send flowers to the Redick family.