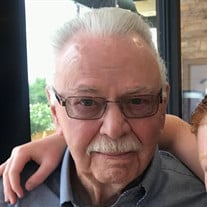 Larry was born on June 15, 1943, at St Anthony’s Hospital in Amarillo, TX. As a young child, he moved to Seminole, TX where he attended Margaret Wills Elementary, Sam Houston Junior High. The family attended San Jacinto Baptist Church where Larry was a Royal Ambassador. They later moved to Richardson, TX, where he graduated from Richardson High School in 1962. Larry joined the US Navy immediately after graduating high school. He flew with VAW-13 Zappers in over 100 combat missions as a radar scrambler in the Vietnam war. “We lost the war 17-10” as Larry would say. US Navy 1962-1966. Larry was a beloved father, grandfather, father-in-law, and friend to many. Storytelling and working on old cars were his favorite pastimes. He was “like a father” to those who knew him. His light-hearted nature made it easy to sit and talk for hours. He was engaging and knew how to make someone feel welcomed and could make a crying person laugh and make you forget that you had any worries at all. Most of all he was a man who loved the Lord and took to heart loving others as Christ loved the church. As a Papa, he could be found teaching his grandson how to woodwork, cooking Ramen noodles, or watching SpongeBob Squarepants. He is greatly missed and we think that God broke the mold when he made Larry. University of North Texas graduate Western Auto, Territory Manager, southeast TX and south LA; Windsor Door, Distribution Manager in Houston Attended Tomball Bible Church in Tomball, TX Preceded in death by Mother, Lennie (Lynn) Jones; Father, Charles Simpson; Brother, Max Simpson; Grandparents, Hershel Edward “Ed” Allen and Alice Daisy Allen of Amarillo, TX Survived by: Child, Brian Simpson & wife Kay of Pinehurst, TX; Grandchild, Kade Simpson Siblings: Lynda Corbin of Claude, TX; Allen Matthews of Bedford, TX Laid to rest in Claude, TX

The family of Lawrence "Larry" Wayne Simpson created this Life Tributes page to make it easy to share your memories.

Send flowers to the Simpson family.