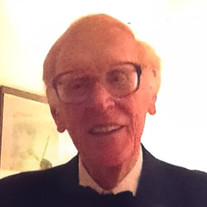 Lawrence Frank Crooke, Jr died in London, England, UK on March 19, 2017. He was born in Conroe, Texas, the son of Lawrence Frank Crooke, Sr and Marguerite (Caldwell) Crooke. His paternal grandfather was a founder of Conroe. He was graduated from the University of Texas having attained a B S Degree and a M S Degree in Chemical Engineering. He was a life member of the American Institute of Chemical Engineers, the UT Alumni Association, and a member of the Masonic Lodge. In London, Lawrence was a member of the International American Church, The American Society and numerous other organizations. Lawrence (Larry) was dedicated to his professional career in the oil and gas industry, serving in management positions in process engineering in world-wide projects. He is survived by his wife, DenaLee (Jones) Crooke, formerly of Tulsa, OK; Virginia Ann Miller of Carrollton, TX, Linda French of Belmont, MA, Jane C Booher and husband James of Corsicana, TX; and other close relatives residing in Texas, Oklahoma, California, and Washington, DC. A Celebration of Life Ceremony will be held at 2 pm on Wednesday, April 5, 2017 at the First United Methodist Church of Conroe, 4308 W. Davis Street, Conroe, TX 77304. Thanks to Eickenhorst Funeral Services in Conroe for their assistance. If desired, commemorative donations may be made to a favorite charity.

The family of Lawrence Frank Crooke Jr. created this Life Tributes page to make it easy to share your memories.

Send flowers to the Crooke family.