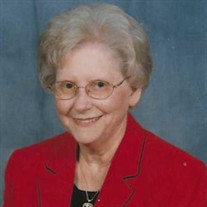 Laura Ann Atkinson, 90, left this world to be with her Lord and Savior Jesus Christ on January 2, 2022 at her home in Porter, Texas, surrounded by her four daughters and son-in-law. Laura was born August 31, 1931 to Estelle and Robert Carl. She was the third out of seven children. She attended Camden and Corrigan grade schools and graduated from Chester High School in 1948, then attended a business school in Beaumont, Texas. She grew up on the side of a sandy dirt road between Camden and Moscow in the back rooms of a store owned by her parents. Her and her siblings had a great time playing with each other as they grew up. She took care of her little brother, Ernest Lee until his death at two and half years old, this affected Ann her entire life. Her passions were children, sewing, fishing, and camping. The joys of Ann’s life were her four girls, nieces and nephews and any babies she could get her hands on. She was an excellent seamstress and spent hours making her girls' clothes. Ann was a wonderful Christian mother and wife. Her family was her life and she was the light of theirs. Returning to Chester after her Business School, she married Alton Marshall Woodrome on August 6, 1948 and they were married for 51 years until Alton passed. During this time, Ann and Alton raised their four daughters in the Golden Triangle area until they returned to Chester, Texas in 1972. Ann worked at Gibson’s department store in Port Arthur, Texas along with International Paper in Camden, Texas where she retired in 1994. Ann met and married Ira Atkinson in 2003, they had 18 wonderful years together. They attended First Baptist Church of Porter, where they were very active in the church. Ira and Ann enjoyed their RV club and playing 42 and 84 with friends and family. They were blessed. Ann was preceded in death by her parents, Estelle and Robert Carl; brother, Ernest Lee Carl; sisters, Joyce Best and Reda Chandler, and brother Robert Carl Jr.; husbands, Alton M. Woodrome and Ira E. Atkinson. She is survived by siblings, Eunice Vinson of Chester, TX & James Carl of Nederland, TX; daughters, Kathy Gibson of Porter, TX, Carolyn Glaze of Woodville, TX, Sherrie Ewings & husband James of Woodville TX, Gwen Woodrome of Porter, TX; grandchildren, Shane Gibson and wife Karen, Cruz Gibson and wife Emily, Shanunatha Blackburn, Charles Gonzales and wife Lisa, Diana McKee and husband Joey, Jake Ard and wife Amanda, Liz Musick and husband Jon, Sharon Combs and husband A.J.; along with numerous great grandchildren and several great-great grandchildren. Friends are invited to visit with the family at 10 AM on Tuesday, January 11, 2022 at Porter First Baptist Church, 24570 FM 1314, Porter, TX 77365. The funeral service will follow at 11 AM. Graveside and burial will follow at 3 PM in Mt. Hope Cemetery in Chester, Texas.

Laura Ann Atkinson, 90, left this world to be with her Lord and Savior Jesus Christ on January 2, 2022 at her home in Porter, Texas, surrounded by her four daughters and son-in-law. Laura was born August 31, 1931 to Estelle and Robert Carl.... View Obituary & Service Information

The family of Laura Ann Atkinson created this Life Tributes page to make it easy to share your memories.

Laura Ann Atkinson, 90, left this world to be with her Lord and...

Send flowers to the Atkinson family.