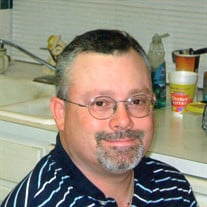 L.R. “Bobby” Read IV was born in Houston on October 15, 1972 and passed away from this earth on August 5, 2016 in the Neches River bottoms he loved so dearly. He is survived by his wife, Jennifer, of Spring, TX; 4 daughters, Rachael, Taylor, McKenzie and Adalynn; father, Bob Read and wife Janie of Spring; mother, Nancy Hobson and husband John of Grapeland, Texas; grandmother, Martha Miller of Spring; stepsister, Marianne Hobson and her 3 sons, Christopher Slate, Mason Slate and Taylor Hunt of Grapeland; stepsister Marlana Bush and husband Wes and their four children Trace, Tyler, Trinity and Taryn; stepbrother, Jake Berryman of Memphis, TN; and last but no least Bobby’s lifelong friend, former Railroader and hunting buddy, Shane Langston, who was very much a brother to him. A memorial service will be held at 1 pm on Tuesday, August 16, 2016 at Eickenhorst Funeral Services, 1712 N. Frazier at Wilson, Suite 115, Conroe, TX 77301. In lieu of flowers, contributions may be made to the charity of your choice.

The family of L.R. "Bobby" Read IV created this Life Tributes page to make it easy to share your memories.

Send flowers to the Read family.