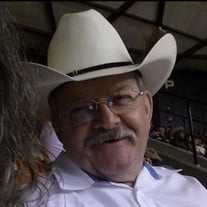 Kirby L. Rutledge, a proud veteran of the United States Army, 66, passed away April 18th, 2022. The son of Laura Jean and Houston Odell Rutledge, he was born in Killeen, Texas. Kirby grew up in a military family in which they traveled often, moving every couple years due to his father being stationed in different parts of the country. Kirby had the nickname as a young child of "Termite", his mother said because "That child was into EVERYTHING" In 1973, he moved back to Conroe where he attended Conroe High School. After graduation, Kirby enlisted in the United States Army. He valued this service highly and served in the 75th Ranger Regiment. Where he received the National Defense Service Medal, Parachute Badge and Marksman Badge M-16. He was always happy to share stories of jumping from planes and all the places he was stationed. Kirby happily served his time in the military and then returned to Conroe to put down roots. Kirby enjoyed driving a truck cross country for M.W. McCurdy Trucking out of Houston for 25+ years. He got to travel all over the US and loved seeing the sights! He had many stories of those days. On weekends, Kirby worked at Johnny B. Daltons as a bartender, he enjoyed singing and in 1993 is where he met Cindy. Kirby loved the nightlife, loved singing, dancing and always encouraging the "next round" for his buddies. He wore MANY hats.... Army Ranger, Truck Driver, Singer, Bartender, Brother, Devoted Husband, Family Caregiver as he cared for Cindy's Grandpa before he too gained his wings, Dad and best of all "Poppi". Kirby was well known for being a stickler for his yard, his hard work, his love for the Dallas Cowboys, Bowling, his love of John Wayne, his homemade chili & salsa, passion for singing and overall having a good time. But most of all his love for his family! He was never one to show emotions, weakness nor live with regrets. Yet one thing he expressed on many occasions to Cindy was the fact he did indeed regret not trying harder with his boys. Even though this was something he struggled with he always made it clear to everyone He was proud and loved his kids more than anything. As years passed Kirby hung up his cowboy hat, put up his boots and traded his jeans for sweats. He had to retire due to his health which forced him to go on disability. He was for sure a fighter and he never backed down. Even when the illness was stronger than him he continued to fight. He fought a hard battle yet in the end he was able to pass in his home and that was one of his wishes. Kirby was known as the occasional grouch yet everyone knew if they needed something they could always come to him! Many will tell you he also was known for having absolutely no taste when it came to spice! He would always try getting the younger ones to "try" the hottest sauces. He was a big trickster for sure! Kirby will always be missed by many, loved by all and his memory will continue to live on in many of us all. He was preceded in death by his parents; grandparents and son, Tony Wayne Rutledge. Kirby is survived by his wife, Cindy of 29 years; children: Kirby "Bo", James, Ashley and Husband Danny, Brittany and husband Travis; grandchildren, Houston, Rylee, Addilyn, Avery, Colt, Lincoln and James, siblings, Louella "Lou" of Jacksonville, Arkansas and Odell of Huntsville ,Texas Friends are invited to visit with the family at 10:30 AM on Wednesday, May 11, 2022 at Eickenhorst Funeral Services, 1712 N Frazier St #115, Conroe, TX 77301. The funeral service will follow at 11:30 AM. The service will be livestreamed for those unable to attend. Graveside and burial will follow at 1:45 PM in Houston National Cemetery, 10410 Veterans Memorial Dr, Houston, TX 77038. We will line up in Lane 2 at 1:30 PM in front of the cemetery's main office. Those wishing to view the livestream: https://youtu.be/sOZF5Qq5OJs

Kirby L. Rutledge, a proud veteran of the United States Army, 66, passed away April 18th, 2022. The son of Laura Jean and Houston Odell Rutledge, he was born in Killeen, Texas. Kirby grew up in a military family in which they traveled often,... View Obituary & Service Information

The family of Kirby L. Rutledge created this Life Tributes page to make it easy to share your memories.

Send flowers to the Rutledge family.