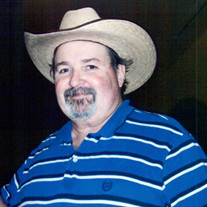 Kenneth Carl Landrum passed away unexpectedly on August 21, 2020. Carl was born on November 2, 1956 in Dayton, Texas. He grew up on Seaberg Farms helping his father farm the rice fields. He attended Dayton schools, graduating from Dayton High School in 1975. He first developed an interest in music as a member of the Dayton High School FFA Talent Team. That interest grew into joining The Midnight Ramblers band, and started a 45 year long passion for playing guitar and singing, particularly as the founding member of The Southern Breeze Band. Carl also taught many Dayton kids fiddle and guitar lessons, and enjoyed playing with smaller ensembles such as the Cow Paddy Daddies and the gospel group, The Breeze Boys. Carl married his high school sweetheart, Tammy Tadlock Landrum, and in July, they celebrated their 45th wedding anniversary. They had a true love story, rarely spending a moment apart. They have three children, Allison, Matthew and Luke. Carl worked over 40 years in the railcar inspection industry. He was a member of the First United Methodist Church of Dayton. Carl is preceded in death by his father, Eldridge Landrum, his mother, Bertha Landrum and his father-in-law, Jimmy Tadlock. Carl is survived by his wife of 45 years, Tammy Tadlock Landrum; his daughter, Allison Landrum; his son, Matthew Landrum, and wife Kristina; and his son Luke Landrum and wife Jessica. He is also survived by his sister, Carolyn Murphy and husband James; mother-in-law Iline Tadlock; and brother-in-law Jay Tadlock. He also leaves behind his most cherished grandchildren, Lorelei, Cooper, Eli, Levi and a soon to be born granddaughter. He also leaves dozens of fellow musicians that he considered his closest friends. Pallbearers will be Jay Knight, Joseph Durant, Kaleb Goff, David Howell, Jeff Nations and Mark Sjolander. Honorary Pallbearers will be Eddie Bird, Raymond Sweeten, Joe Taylor, Rob Austin, Ronnie Lee, J.R. Ungles and Brady Hanson. The funeral service will be streamed online at the link: https://youtu.be/XoZxs8OU2qo In lieu of flowers, a memorial gift can be made to https://www.gofundme.com/f/carl-landrum-medical-bills?utm_medium=copy_link&utm_source=customer&utm_campaign=p_na+share-sheet&rcid=79c11ec7307f441c9a8b8887af7841f8

The family of Kenneth Carl Landrum created this Life Tributes page to make it easy to share your memories.

Send flowers to the Landrum family.