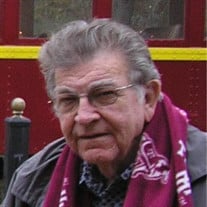 Kenneth Neil Coberley was born in Nowata, Oklahoma on January 3, 1939. He departed this life on March 3, 2016 due to complications of Chronic Obstructive Pulmonary Disease and Congestive Heart Failure. He is survived by his wife of 53 years, Joanne Carr Coberley and daughters Gina Coberley Grimes (husband, Wayne Grimes), Jill Coberley Gregory (husband, George Gregory, III) and Lori Coberley. Grandchildren, Anna Grimes Arriaga (husband, Benjamin Arriaga), Kenneth Wesley Grimes, William Taylor Grimes, Phillip John Imhoff, Jr., George Eucharius Gregory IV, Grant Christopher Gregory and Derry Dominguez Coberley. Great-grandchildren Aden Kasher Arriaga and Sierra Rayne Arriaga. His brother Jim Coberley of Killeen, Texas and numerous nieces and nephews all of whom he loved as if they were his own children. He was preceded in death by his parents Everett and Marjorie Coberley and brother Everett "Jay" Coberley. Ken fought a long and brave battle against his health problems and maintained a bright and cheerful disposition despite his personal suffering. He loved his family and was a kind and generous friend. Everyone that had the pleasure of knowing him, loved him. He enjoyed Blue Bell ice cream, making big breakfasts, living in the country, and grilling outside on the grill. He took pleasure in cooking for his family and getting the steak done "just right." Words cannot express how much we will miss this man. The family would like to thank Pastor Lloyd Maddoux from First Assembly of God in Conroe and the staff at Memorial Hermann, Nexus and Park Manor hospitals for their support during the final months of Ken's life. I wanted a perfect ending. Now I've learned the hard way and some poems don't rhyme and some stories don't have clear beginning, middle and end. Life is about not knowing, having to change, taking the moment and making the best of it without knowing what is going to happen next. Gilda Radner 1946-1989

Kenneth Neil Coberley was born in Nowata, Oklahoma on January 3, 1939. He departed this life on March 3, 2016 due to complications of Chronic Obstructive Pulmonary Disease and Congestive Heart Failure. He is survived by his wife of 53 years,... View Obituary & Service Information

The family of Kenneth Neil Coberley created this Life Tributes page to make it easy to share your memories.

Kenneth Neil Coberley was born in Nowata, Oklahoma on January...

Send flowers to the Coberley family.