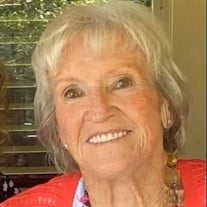 On Monday, March 8, 2021, Karen Kirkpatrick Cline, passed away with family by her side at the age of 81. Karen was born on February 19, 1940, in Charleston, IL to George and Ethel Kirkpatrick. She had 7 siblings including an identical twin sister, Sharon. Karen spent her entire childhood and early adulthood in Charleston until moving to Houston in 1971. On August 15, 1973, she married Robert Eugene Cline. She raised one son, Paul Douglas “Doug”, and three daughters, Janice, Cindy, and Bobbie. She also helped raise eight grandchildren, Michael, Kelly, Amy, Brooke, Blair, Becca, Jake, and Lily as well as five great-grandchildren, Austin, Landon, Layla, William, and Hannah. Karen was an amazing Mom, Nana, Aunt, and friend to everyone she met. But most of all, she was a faithful child of God. She served our Lord with all her heart, giving of herself at every opportunity. She was an active member of The Woodlands First Baptist Church largely serving in the senior adult ministry and volunteering whenever possible. She also volunteered at many events in her neighborhood, Spring Trails, as well as contributed to ways to make the neighborhood more beautiful. Her love for the Lord was no secret as she shared all about His love with friends, family, and even strangers. She fully believed that her purpose here on earth was to tell others about Jesus and was not afraid to do so. Karen was preceded in death by her husband Robert “Bob” Cline; son Paul Douglas “Doug” Hanley; parents George and Ethel Kirkpatrick; siblings Sharon Matheny, Mary Bloxom, Ava Decker, George Kirkpatrick Jr., Floyd Kirkpatrick, Martha Hurst, and David Kirkpatrick. She is survived by her three daughters Janice LeBourgeois (Henry), Cindy Stipe (Brian), and Bobbie Jehle (Blake), numerous grandchildren, great-grandchildren, and several nieces and nephews. A celebration of life will be held at 3:00 PM on Sunday, March 14, 2021, at The Woodlands First Baptist Church on Grogan’s Mill. Visitation will be before the service at 2:30 pm. Interment will be held at 10:00 AM on Saturday, March 20, 2021, in Roselawn Cemetery, Charleston, IL. In lieu of flowers, donations can be made to the Community Missions Fund at The Woodlands First Baptist Church or the Montgomery County Animal Shelter.

On Monday, March 8, 2021, Karen Kirkpatrick Cline, passed away with family by her side at the age of 81. Karen was born on February 19, 1940, in Charleston, IL to George and Ethel Kirkpatrick. She had 7 siblings including an identical twin... View Obituary & Service Information

The family of Karen Kirkpatrick Cline created this Life Tributes page to make it easy to share your memories.

Send flowers to the Cline family.