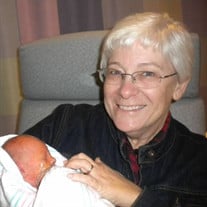 Judy Lyn Love went to be with the Lord on Sunday, April 7, 2019 surrounded by family in Conroe, Texas. Lyn was born on August 23, 1950 in Lubbock, TX to Lee and Louise Rice. She was the second of four children and the only girl. Her father was a notable police detective and her mother was a switchboard operator. Lyn had many talents including making clothes with her mother and modeling them for school fashion shows and playing multiple musical instruments. Her favorite activity was going on Bible retreats to Glorietta, New Mexico with the Southcrest Baptist youth group. She graduated from Lubbock High School in 1968. Lyn graduated from Texas Tech University in 1972 with a degree in Elementary Education. She met the love of her life, Earl, in September of 1975, and they were married on June 4, 1976. Together, they had two sons, Levi and Austin. Lyn had a passion for teaching and helping others. She taught many students over the years in Lubbock, Irving, Conroe, and several districts in Central Texas. After she retired in 2009, Lyn helped Earl achieve his dream of being a winemaker, and together they opened Texas Star Winery in Richards in 2010. She quickly became a fixture in the small town. She helped run vacation bible school and summer programs for the children in Richards. In 2014, Earl and Lyn retired from the winery business and moved to Montgomery to be closer to their grandkids. Lyn’s greatest joy was being a grandmother to her seven grandchildren. She loved to have sleepovers complete with tractor pizza and board games. She enjoyed cheering on her grandsons from the sidelines at games. She also loved to play dress up with her youngest grandkids. Lyn was preceded in death by her parents, Mary Louise and Walter Lee Rice, Jr. She is survived by her husband, Earl Love of Montgomery; son, Levi Love and wife, Lacey of Conroe; Austin Love and wife Rebekah, of Conroe; grandchildren, Trey, Mason, Gwendolyn, Anna, Asher, Benjamin and Evelyn; brother, Lee Rice and wife, Marsha of White River Lake; brother, Lanny Rice and wife, Cathy of Slaton; and brother, Tim Rice of Lubbock.

Judy Lyn Love went to be with the Lord on Sunday, April 7, 2019 surrounded by family in Conroe, Texas. Lyn was born on August 23, 1950 in Lubbock, TX to Lee and Louise Rice. She was the second of four children and the only girl. Her father... View Obituary & Service Information

The family of Judy Lyn Love created this Life Tributes page to make it easy to share your memories.

Send flowers to the Love family.