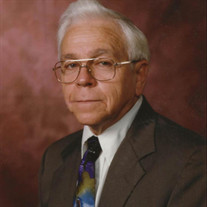 Joseph Jerry Broussard Conrad left this life to be with Jesus, his wife Nell, and his beloved son Robert on January 10th, 2021. He passed away peacefully in his new home in Pinehurst, Texas, in the loving care of his youngest daughter, Kay Conrad Simpson, his son-in-law Brian Simpson, and his grandson Kade. Known to family and friends as “Jerry,” he frequently joked that he was "still grumpy," but in reality his genuine compassion for others, enormous heart, and boundless sense of humor remained until the very moment he said goodbye to us at 84 years of age, having lived a life he considered fulfilled. Jerry is survived by his five children: Anthony Conrad, Catherine Conrad, David Conrad, John Michael Conrad, and Kay Conrad Simpson; daughters-in-law, Jaime and Deborah; eight grandchildren: Brynn, Alex, Christy, Grant, Kristin, Kelsey, Kade, and Robert; and seven great-grandchildren: Reece, Noah, Trystan, Jackson, Cohen, Henry, and Valentino. Also surviving Jerry is his long-time friend, Joe Hebert, after sharing years of companionship, a daily Cajun breakfast tradition, and general ruckus and mayhem. He is further survived by his other cherished friends of many years: William "Bill" Bassett Jr., Ronald Landry, Herman Schellstede, Ken Fontenot, and Ron Giblin, among numerous others. As the last surviving child of nine children, Jerry will join in Heaven his parents Alicia and Denis Broussard, his adoptive parents Anne and Lawrence Conrad, and his siblings: Claude, Murphy, Willis, Rita, Larry, Garry, Denise, and baby Jacob; along with his dear friend Benedict Castille. Joseph Broussard was born on December 12th, 1936, in Catahoula, Louisiana, to Alicia and Denis. His earliest memory was of walking down the levee there. He spoke only French until the age of five when he was introduced to English. In 1942, he went to stay with his aunt Anne and uncle Lawrence, on Pollard Avenue in New Iberia, the city on the Bayou Teche that Jerry deeply loved and called home for the rest of his life. They later adopted him in 1952, giving him the last name “Conrad” while also learning at that time that he had the middle name, “Jerry.” Jerry graduated from St. Peter's College in 1955 with a passion for reading and public speaking and an insatiable interest in Louisiana history. He enlisted in the U.S. Army in 1957. Achieving the rank of Spec. 4, Jerry served as a radioman with a top-secret clearance in Chitose, Japan, for two years before receiving an honorable discharge in 1960 after four years of faithful service to our country. After completing his enlistment, he married Karen Nelson. They were blessed with six children. Jerry later married Rita Nell Landry, a kind and caring spirit who treated Jerry's brood as her own. She and Jerry enjoyed a wonderful 21 years together until she went to be with God in 2007. In the early '70s, Jerry began a successful career in the oil industry as a platform supply vessel captain for State Boat and Ensco. He enjoyed this nautical adventure in the Gulf of Mexico and retired after over 25 years. Jerry's selfless, generous nature and love for others shined through in everything he did, from his participation in social groups to his daily life to his endearing quirks. Jerry was a lifelong devoted Catholic, member of Sacred Heart of Jesus Catholic Church, The Knights of Columbus, and a Tea Party Patriot. For many years he taught youth catechism. He loved transistor radios, everything Acadiana, and cooking — and especially eating — delicious Cajun cuisine! Jerry enjoyed going outdoors in Louisiana's natural beauty, and astronomy, which inspired his work as a boat captain. Perhaps what Jerry's friends and family love and admire most was his positive outlook on life. Even when his health troubled him, he never complained. He continued wearing his funny t-shirts and cracking jokes to make people laugh — because the happiness of those around him was what he truly cared about. When thanked and complimented on an act of kindness, Jerry would puff out his chest and say, "I know, I know — but it's hard to be humble when you're a hell of a man!" The truth is, Jerry was humble, and he was indeed one hell of a man. He always believed in putting his family first, and his final words to them were, "I love you with every fiber of my being. My greatest regret in my death is leaving you." Jerry’s memory will be forever treasured in the hearts of everyone who knew him. He donated his body to benefit his fellow man, and so there will not be a traditional funeral service. Instead, the family will be holding a celebration of Jerry's life in New Iberia this spring. In lieu of flowers, please send donations to www.lifelegaldefensefoundation.org.

Joseph Jerry Broussard Conrad left this life to be with Jesus, his wife Nell, and his beloved son Robert on January 10th, 2021. He passed away peacefully in his new home in Pinehurst, Texas, in the loving care of his youngest daughter, Kay Conrad... View Obituary & Service Information

The family of Joseph Jerry Broussard Conrad created this Life Tributes page to make it easy to share your memories.

Joseph Jerry Broussard Conrad left this life to be with Jesus,...

Send flowers to the Conrad family.