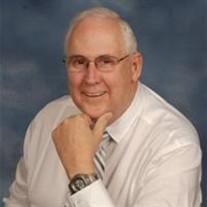 John Edward Stewart, age 71, left us to go to heaven in the afternoon of April 12, 2016 to be with his Lord. Born July 24, 1944 in Cedar Rapids, Iowa. He was preceded in death by his parents Evelyn and Amos Stewart and his cousin and best friend, Jon Hoglund. John's primary education took place in Iowa. He attended Parson's College in IA and Carthage College in Kenosha, WI, graduating with a Master's in Business. On December 2, 1967 he married Penelope LaFleur in Meriden, CT. Included in that marriage came the wonderful addition of three small children, Betsy, Suzette and Polly, which John adopted as his own. They enjoyed a lifetime relationship and he traveled to the New England area to visit them just last year. He remained in this marriage for 27 years. John's employment responsibilities required extensive travel and established homes in Georgia, Wisconsin, Michigan, Massachusetts, New Hampshire and even in faraway Ekali and Nea Kifissia, Greece. John's primary employment was with three companies: Eaton, Yale & Towne, Inc., Ansul Fire Retardant Systems and Textron, Inc. John met Donna England in Houston, TX approximately 17 years ago. Donna and John lived in Houston at the time of their marriage, but moved to The Woodlands, then San Antonio and back to Conroe, TX where they were currently residing. They shared many happy moments together. Donna and John are members of the First Presbyterian Church in Conroe. John was passionate about helping those less fortunate than himself. He served on the Executive Board for Family Promise, an organization sponsored through their church helping homeless families. The most important priorities in John's life were his faith in God, his wife Donna, his children, grandchildren, brother and sister, and in-laws, Pat and Charlie Sweet and their children. John is survived by his wife Donna Stewart, siblings Robert Stewart and Susan Stewart-Hicks, his children Betsy Simmons, Suzette Stewart and Polly Duprez, his grandchildren Allison Duprez, Rachel Duprez, David Simmons and Michael Simmons, his cousins Tim Stewart, Tom Stewart and Mary Ann Hoglund and his nieces Lynette Hill & Heather Wilson. In lieu of flowers or other considerations the family wishes that donations be made in the name of the John E. Stewart Memorial Fund to the First Presbyterian Church in Conroe, Texas or Family Promise.

John Edward Stewart, age 71, left us to go to heaven in the afternoon of April 12, 2016 to be with his Lord. Born July 24, 1944 in Cedar Rapids, Iowa. He was preceded in death by his parents Evelyn and Amos Stewart and his cousin and best... View Obituary & Service Information

The family of John Edward Stewart created this Life Tributes page to make it easy to share your memories.

John Edward Stewart, age 71, left us to go to heaven in the afternoon...

Send flowers to the Stewart family.