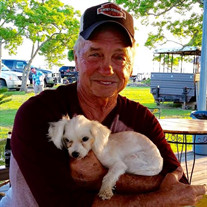 John “Rocky” Salsberry always said he was going to work until the day he died. On February 4th, 2017, he did just that, passing suddenly while on the job. He was born March 14th, 1940 in Logan, Ohio, but has been a Texas transplant for over thirty years. Rocky is survived by 3 children: Rocky (Heather) Salsberry jr., Tina (Robert) Moreno, and Mark (Susie) Salsberry, 10 grandchildren and 3 great grandchildren; brothers, Ron (Pam) Bowman and Greg (Sue) Bowman; and sister, Janet Douglas. He is preceded in death by wife, Eva Salsberry; Mother, Shirley Bowman and father, Donald Salsberry. He leaves behind one tiny bundle of white fur named Harley. Rocky was known to drink coffee with good friends in the mornings, build crazy machines like “The Green Streak”, and he always had Harley riding shotgun whether it was on his motorcycle or in his truck. Those that knew Rocky understood that he was a free spirit, essentially meaning he didn’t like being told what to do. He was a hard worker, never taking breaks up until his last breath. Rocky enjoyed good food and spending time with his family. He could always be counted on to get a second helping of Yankee noodles, deviled eggs and pumpkin pie. He was a collector of coins, watches, knifes and pretty much anything else he assigned value to. Services will be held on Saturday, February 25th starting at 2:30pm @ the American Legion in San Leon, TX on FM 517. The service is a potluck; please feel free to bring a food dish. Donations for funeral services will be accepted. Please send flowers to his Daughter’s house: Tina Moreno @ 2704 Broadway ST. San Leon, TX 77539. Please note to leave them in building at gated driveway. Keep riding that Harley, Rocky. You will be missed.

The family of John Rockney Salsberry created this Life Tributes page to make it easy to share your memories.

John “Rocky” Salsberry always said he was going to work until...

Send flowers to the Salsberry family.