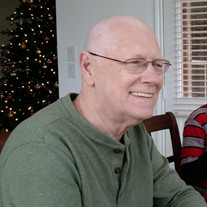 John Howard Miller, 72, passed away Monday, September 17, 2018 at his home in Conroe, Texas. John was born September 28, 1945 to Russell and Mary (Perry) Miller in Winnepeg, Manitoba, Canada, and was the oldest of three children. He graduated from Hofstra University with a Bachelor of Business Administration on June 3rd 1973. John served in the U.S. military in Vietnam after his high school graduation. John spent most of his working life as an auditor for the U.S. Government and retired in 1999. During the eighties, John packed up his family and moved to Saudi Arabia. The five years spent there hold many fond memories for John and the family. Upstate New York was his next stop, and it was there that his family witnessed John’s green thumb (passed down from his mother). John turned a small backyard into an apple orchard and vegetable garden, from which the juiciest tomatoes were picked and eaten right off the vine. John enjoyed home projects and woodworking. John was also an avid card player and showed no mercy when playing against an opponent (regardless of their age). John is survived by sons, John (Melissa) Miller and David (Emily) Miller; daughters, Elizabeth George and Cynthia (Jay) Hilton; grandchildren, Madelyn and Matthew Miller, Hope, Amelia, Moira, and a soon-to-be born grandson, and R. Blaze, M. Bishop, and D. Brooks Hilton, brothers, Peter (Sandy) and Terrance (Rocky) Miller; and nephew, Brendon Miller; nieces, Brittany and Anne-Marie Hager. John was preceded in death by his parents. The family is honoring John’s wishes and not having a memorial service. His family will honor him at a private interment at the VA Memorial Cemetery on October 5, 2018. In lieu of flowers, memorials may be made to the Heart society, PTSD & Vietnam Vets.

John Howard Miller, 72, passed away Monday, September 17, 2018 at his home in Conroe, Texas. John was born September 28, 1945 to Russell and Mary (Perry) Miller in Winnepeg, Manitoba, Canada, and was the oldest of three children. He graduated... View Obituary & Service Information

The family of John Howard Miller created this Life Tributes page to make it easy to share your memories.

Send flowers to the Miller family.