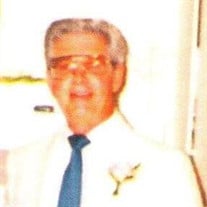 John Winfield Keegan, Jr., was born June 07, 1933, in Philadelphia, Pennsylvania, to John, Sr., and Anna Cole Keegan. He passed away on September 7, 2017, several hours after arriving home from Vitas Hospice, The Woodlands, Texas. He had a... View Obituary & Service Information

The family of John Winfield Keegan Jr. created this Life Tributes page to make it easy to share your memories.

Send flowers to the Keegan family.