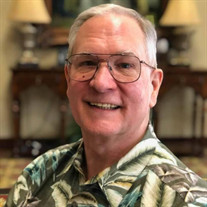 John Pelham Hereford of Spring, TX died on December 1, 2020. Always a gentleman, John was a Pampa, dad, son, brother, uncle, pastor, and friend to many. He was a strong Christian, serving others in faith throughout his life. He was 69 years old and lived with his wife, Lanita Hereford at the time of his death. John’s journey began as the son of Karl Thomas and Myra Hereford, born on March 11, 1951 in Lexington, KY. He earned his pilot’s license when he was 16 years old and later graduated college from Mankato State University in MN in 1973. His career as a flight instructor and professional pilot allowed him to live in several states during his life, including Virginia, Oklahoma, Delaware, and finally, Texas. He enjoyed flying, reading, working with the local church, traveling internationally, and studying the Bible. John worked for Conoco/Phillips for 27 years, working first as a pilot and later as an Aviation Safety Advisor. After his retirement, he joined the staff at The Woodlands First Baptist Church in The Woodlands, Texas, as the Pastoral Ministry Associate, where he has served for 12 years. He also served as the Fresh Hope Ambassador for the Southwest during this time. Through his work with the church, John has been a champion to those walking down the rough road of life. He dedicated his days to adult singles, seniors, and those living with mental illness. One of his recent accomplishments is organizing the Belly of the Whale Conference, where he worked directly with people struggling with mental health, addiction, and recovery problems. John is survived by his wife Lanita who loved him dearly, daughter Michel Roberts and husband David of Oklahoma City, OK; son James Hereford and wife Kelly of San Diego, CA; daughter Kynada Boland and husband Justin of Israel; son Jake Aldrich and wife Jenny of Spring, TX, and - his favorite of all things - his eight grandchildren: Bella, Sabrina, Lucah, Jeshua, Azarah, Kynza, Garyson, and Bo; his mother Myra Hereford of Danville, VA, sister Maury Israelson and her husband Eric of Tucker, GA; sister Sarah Latham and husband Dan of Danville, VA; brother in law Jerry Gass and wife Nadine; as well a host of nieces, nephews, and cousins. He was preceded in death by his father, Karl Thomas Hereford, and his grandparents, Ada Conner, Myron Conner, Sara Hereford and John Thomas Hereford. His family and friends will celebrate his life with a short service at The Woodlands First Baptist Church on Friday, December 4 at 11:00 a.m. at 11801 Grogan’s Mill Road, The Woodlands, TX. Friends are encouraged to pay respects to John during an open visitation at the church starting at 10:00 a.m. Pastor Bruce Webb will officiate, and the service will be live-streamed for those who want to attend from the safety of their homes. Graveside and inurnment will take place at 11:00 a.m. on Tuesday, December 8, 2020 in Resthaven Sunset Memorial Parks, 1901 E Hubbard Rd, Ponca City, OK 74604. Donations may be made to continuing John’s mission of faith-based mental health benevolence through The Woodlands First Baptist Church. John will be deeply missed by all who knew him. *For those wishing to planning on attending the visitation and funeral services, the family requests that everyone wears a mask and practices the social distancing guidelines.* The live stream can be viewed at: https://youtu.be/I8xussiQ8f8

John Pelham Hereford of Spring, TX died on December 1, 2020. Always a gentleman, John was a Pampa, dad, son, brother, uncle, pastor, and friend to many. He was a strong Christian, serving others in faith throughout his life. He was 69 years... View Obituary & Service Information

The family of John Pelham Hereford created this Life Tributes page to make it easy to share your memories.

Send flowers to the Hereford family.