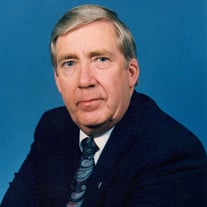 John Clark Blankenship of Montgomery, Texas, went to be with Jesus on December 2, 2017. John was born October 10, 1937 in Lafayette, Indiana. At a young age, he traveled by train with his mother and siblings to California. It was age 14, in Carmelitos, California where John met the next-door neighbor, Patsy Ann Powell, who became his best friend and would later become his wife. John and Patsy were married on Jan 7, 1956 in Yuma, Arizona. John served his country between 1961 to 1963 in the US Army as a Supply Specialist in the Quartermaster Corps, and remained in Active Guard Reserves through 1967. After serving his country, he returned to the vending and foodservice industry. In 1971, John moved his family to Alabama and began college while working full-time and raising his small children. He graduated in 1976 from Gadsden State Junior College in Alabama and continued a successful career, moving his family to different states with each promotion, enjoying new adventures, and making many lasting friendships with each transition. John and Patsy were long time members of the Oak Hill United Methodist Church in Austin, Texas where they served as volunteers with Stephen Ministry until retirement in 1991. At retirement, they followed the same dream as John’s parents accomplish in their retirement. John and Patsy sold the home in Austin, Texas, including the furniture, and purchased a 5th wheel trailer to travel the United States, visiting friends and family every stop of the way. John was an example of loyalty, dedication, and support to all those in his life and anyone fortunate to know him. The imprint of his compassionate nature will forever be felt by the people he knew and loved. John is preceded in death by his parents, Leonard and Dorothy Helton. John is survived by his devoted wife, Patsy Powell Blankenship; son John Michael Blankenship of Montgomery, Texas, and daughter Debra Dozier and son-in-law, Matt of The Woodlands, Texas. He also leaves behind two grandchildren Jolie Blankenship (14) and Ryan Blankenship (26). Other family members include sister JoAnna Bettencourt of Fresno, California, brother Mike Blankenship of Buena Park, California and brother Robert Blankenship and wife Carol of High Point, North Carolina. John is a favorite Uncle to many nieces and nephews.

John Clark Blankenship of Montgomery, Texas, went to be with Jesus on December 2, 2017. John was born October 10, 1937 in Lafayette, Indiana. At a young age, he traveled by train with his mother and siblings to California. It was age 14,... View Obituary & Service Information

The family of John Clark Blankenship created this Life Tributes page to make it easy to share your memories.

John Clark Blankenship of Montgomery, Texas, went to be with...

Send flowers to the Blankenship family.