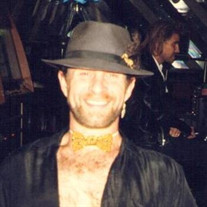 John Paul Alers, age 57, passed away on February 5, 2019 in Conroe, Texas. He was born on December 16, 1961 in Rolla, Missouri and grew up in Licking, Missouri. He graduated from Licking High School in 1980 and moved to Texas shortly thereafter. He was a driver for cross country delivery on an 18-wheeler for a few years. He worked a brief time loading supply trucks for Eckerds Warehouse in The Woodlands, Texas. Later, he worked as a Certified State Vehicle Inspection Officer at the former Northside Texaco Station on the corner of Frazier St. and Semands St. in Conroe, Texas. During this time, he was affectionately known as “Texaco John.” He did a short work period as maintenance at Lake Conroe Village on Hwy 105. He then became a welder/fabricator for Tricon Industries INC. in Spring, Texas working alongside his dad, Bill Alers. John was a “Jack of all Trades” handy man and could fix and repair almost anything. In his last few years due to kidney and heart disease, he was a resident of Conroe Health Care Center. He was preceded in death by his father and mother, William “Bill” and Eve Alers; and brother Fred Alers, all formally of Licking, Missouri. He is survived by his life-partner of 30 years, Keith Popp of Conroe, Texas, whom misses him greatly!; his sister and brother-in-law, Victoria and Andy Anderson of Holt Summit, Missouri; brother, Russell Alers of Conroe, Texas; niece, Debbie Lou and her husband Mark Yates of Licking, Missouri; great-nephews, Tony, Toby, and Tyler Yates of Licking, Missouri; sister-in-law, Bonita Alers of Licking, Missouri; and numerous cousins in Arkansas, Louisiana, Missouri, Oregon, and many friends in the Montgomery County area. A private service with family and friends will be held at a later date. “Goodbye my dearest and beloved best friend, my heart grieves with pain for you!” Your devoted partner, Keith

John Paul Alers, age 57, passed away on February 5, 2019 in Conroe, Texas. He was born on December 16, 1961 in Rolla, Missouri and grew up in Licking, Missouri. He graduated from Licking High School in 1980 and moved to Texas shortly thereafter.... View Obituary & Service Information

The family of John Paul Alers created this Life Tributes page to make it easy to share your memories.

Send flowers to the Alers family.