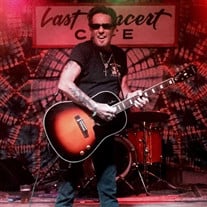 The Celebration Life will be held at noon, on Sunday, June 6, 2021 at Last Concert Cafe, 1403 Nance St, Houston, TX 77002. At 4:00 am, Saturday December 5, 2020 Jimmy Lee Deen lost his battle with an aggressive cancer. Jimmy was born March 31, 1951. He was a musician who never achieved world-wide fame, but was the embodiment of Rock Star to those who had the good fortune to see him perform, make his acquaintance, or call him friend. Jimmy Lee Deen was on the forefront of the Texas music scene since the 70's and in the trenches opening and headlining for groups such as Jerry Jeff Walker, Doctor Hook, AC/DC, The Ramones, Pat Benatar, and Joan Jett. He contributed his guitar work and stage presence to Sam the Sham & the Pharaohs [Woolly Bully], The Drifters [Up On The Roof], and even the "Killer" Jerry Lee Lewis. As a founding member of Jeremiah, a successful touring band and Battle of The Bands winner two years in a row, Jimmy became known as a local rock legend. The last several years he pursued Acoustic "Americana" performing locally in Houston with a weekly residency at Last Concert Café. Until his death he continued to perform in the Houston area as a solo, as a duo with Wendy Elizabeth Jones, and as band leader of The Jimmy Lee Band performing with David Odea, Chaz Nadege and many more. His show featured songs by songwriters like Merle Haggard, Van Morrison, the Rolling Stones, and John Prine. He was also known for his original songs, like “Mexican Tulips”, “One More Tequila”, and “Criminal”. No matter the size of his audience, he gave a show for 5,000. He sang with feeling that deeply touched his listeners. Jimmy taught guitar at Heights Guitar School. And for years, he taught music every week at “Sunday School”; an informal gathering at the Last Concert Café that saw newcomers and old timers jamming with him on songs from the last 60 years of American pop music. There are many Houston performers whose music has been enriched by lessons he shared. Carolyn Wonderland writes, “He was the standard bearer of what is cool and real. You knew it was going to be a great gig when you saw Jimmy there, his presence brought everything up a notch. He embodied rock n roll and there will never be another like him. I have looked up to him since I was a teenager playing Tuesdays at the Last Concert Cafe. There are plenty of tears as I write this, but I must pause to reflect how lucky we are to have shared his time and to catch a glimpse of what he saw, knew, and loved through song. RIP Jimmy Deen. You were a character with great character.” He was preceded in death by his father, Randolph Deen, and survived by his mother, Betty Wise Deen; his brothers, David Deen, James Deen, James Maurice Deen; his sister, Jamie Deen; his daughter, Nikki Walker; his nieces and nephews, Stephanie Anderson, Misty Dawson, Shelby Beseda, Zane Deen, Kaimbry Deen, Andrew Deen, Payton Starcher, Skylar Deen; and hundreds of friends, students and fans.

The family of Jimmy Lee Deen created this Life Tributes page to make it easy to share your memories.

The Celebration Life will be held at noon, on Sunday, June 6,...

Send flowers to the Deen family.