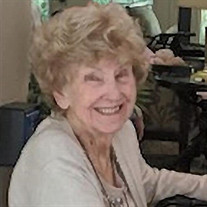 Jeanne Cazaubon Gagliano, 89, gained her angel wings on January 27, 2021. She was born on April 22, 1931 in New Orleans, Louisiana to Harold and Marion Cazaubon. She married Charles J Gagliano Sr on April 24, 1948. They were married for 66... View Obituary & Service Information

The family of Jeanne Cazaubon Gagliano created this Life Tributes page to make it easy to share your memories.

Send flowers to the Gagliano family.