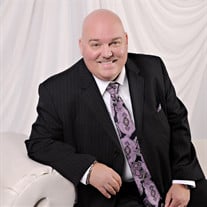 Jay R. Smith (aka Chris St. James) Jay R. Smith died suddenly of a massive heart attack at home in The Woodlands on Sunday, December 14 at the age 45. He was born March 20, 1969 in Bellaire, Ohio to Peter J. Smith and Theora Morris Smith, who pre-decease him. Jay is survived by his loving wife of 20 years, Tracey Boase Smith and their furry four-legged child, Ivey Westie St. James. Also surviving him are his sister and brother-in-law Carolyn and Johnny Williams of Pasadena; sister Linda Cooper of Jonesborough, Tennessee; and brother David Cooper of Pawley's Island, South Carolina. Other family members include his parents-in-law David and Beverly Baldwin of Friendswood; John C. Boase of Midland; and brother-in-law Michael D. Boase of Houston. Jay also had several loving nieces including Stephanie, Kimberly, Alicia, and Barbara and their spouses. Many friends in the music/entertainment world also mourn his passing. During a long career in the entertainment and music industry, Jay was known professionally as Chris St. James. He began DJ-ing at the age of 13 when his parents accompanied him to local gigs in Ohio. He graduated from high school in Bellaire and began his career with MTV as Downtown Julie Brown's DJ. He earned an associate degree in recording production from the LA School of Recording in the early 90s. Jay's career also included touring with well-known bands as Front of House Sound Engineer. He moved to Houston in 1992, where he was heard on several popular stations as Chris St. James. For many years, Chris (Jay) was entertainment director and DJ for The Hop night clubs located in Clear Lake and north Houston. He and Tracey established Custom DJ Drops in 2001 to provide production for mix tapes and CD's for an international DJ clientele. Despite being legally blind from severe diabetes, he most recently served as a popular DJ at Johnny B. Daltons in Conroe, and was quickly nick-named JayBird. Jay was devoted to Tracey and often expressed his deep love for her publicly and in numerous romantic ways. Besides music and spoiling Tracey and Ivey, he enjoyed singing karaoke, all water sports, cruising, and dining out at nice venues. His favorite charities were all animal rescue organizations and the Diabetes Foundation, both of which would appreciate tributes in his honor. His family is comforted in the knowledge that he was a Life Gift Donor whose corneas will help others to see, and to aid burn and accident victims with skin and bone grafts. Fun-loving and living large, Jay's favorite motto was “Go Big or Go Home!”

Jay R. Smith (aka Chris St. James) Jay R. Smith died suddenly of a massive heart attack at home in The Woodlands on Sunday, December 14 at the age 45. He was born March 20, 1969 in Bellaire, Ohio to Peter J. Smith and Theora... View Obituary & Service Information

The family of Jay "Chris St. James" Smith created this Life Tributes page to make it easy to share your memories.

Send flowers to the Smith family.