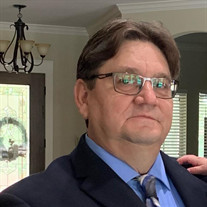 James Charles “Wumpsey” Ward was born in Houston, Texas July 7, 1959 to parents James Charles Ward Sr. and Billie Mae Ward. Wumpsey passed away on June 10, 2021 in Conroe, Texas at the age of 61. He was preceded in death by his father, James Charles Ward Sr., and brother, Cecil Ward. Wumpsey is survived by his mother, Billie Mae Ellis; his siblings, Lisa Hargrave, Perry Ward and Tracy Ellis; his wife of 34 years, Debra Rose Ward; his 10 children, Edmund James McBurney Jr., Maria Louise Theurer, Aaron David Dean McBurney, Nathan Matthew McBurney, Joshua Michael McBurney, Christopher Patrick McBurney, Allison Nicole Moore, Zakary Steven Wumpsey Ward, Micah Eyan Ward and Mikayla Nicole Perez; and his 24 grandchildren During his life he was an accomplished musician, master electrician, talented carpenter and successful business owner. Wumpsey was a beloved member of the Church of Jesus Christ of Latter-day saints for 33 years where he served in many capacities showing all of us the true love of Christ through his time as a teacher, scout leader and priesthood leader. He adored his children, cherished his grandchildren and displayed his everlasting love unto his devoted wife Debra. Be it a simple conversation or complete dedication to family, friends or career, you knew Wumpsey was genuine to the core. His personality naturally attracted others, making it hard not to join in on his playful energy and quick wit. A “Celebration of Life” for Wumpsey will take place at 11:00 a.m. on Saturday, June 19, 2021 in Conroe, Texas at The Church of Jesus Christ of Latter-Day Saints located at 1516 Wilson Rd., Conroe, Texas 77304.

The family of James Charles "Wumpsey" Ward created this Life Tributes page to make it easy to share your memories.

Send flowers to the Ward family.